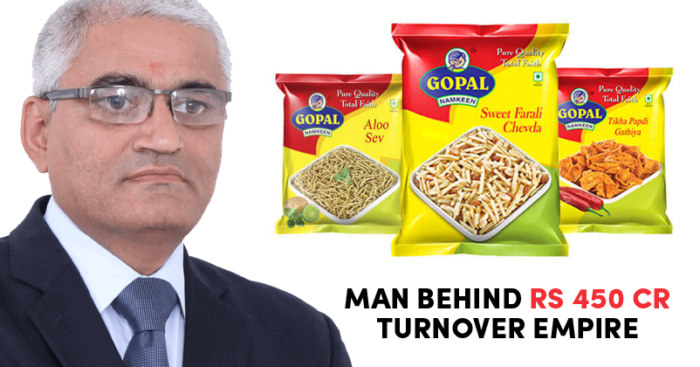 Gopal Namkeens has made a prominent name in the snacks industry. Ever since it was established in 1994 by Bipinbhai Hadhwani in the city of Rajkot, the company has been steadily moving towards success.

Let’s know a little more about Gopal Namkeens and how it came to be.

How It All Began

In 1984, Bipinbhai Hadvani, a resident of Jakhandaurana taluka in Rajkot, used to run a small namkeen shop in his village along with his father and his brothers. Bipinbhai started selling a Gujarati Namkeen ‘Chavanu’ at a price of Rs 1 per packet and was selling in villages nearby. Then in 1990, with an investment of Rs 8500, he started a business by the name of ‘Ganesh Namkeen’ in partnership with a relative. They started the manufacturing unit in a residential set-up and were selling Soy, Ganthia, Daldmuth, Chana dal, and peas packets.

Even though he had big hopes with the company, it was not doing well. Bipinbhai wanted to take the company to new heights but was unable to find a suitable investor in his business.

It was in 1994, that Bipinbhai, along with his sister and brother-in-law, opened up a shop in Rajkot with the name of ‘Gopal Namkeen’. After 6 years, his brother decided to join his venture as well. This encouraged Bipinbhai to expand more and In 2003 he decided to set up a manufacturing unit with an automatic frying machine that helped him increase his production capacity. Company’s Stand In The Market

Widely loved by many customers, Gopal Namkeen today has an annual turnover of Rs 450 crores. But what is even more interesting about these numbers is that the brand has not spent a single penny on marketing or advertising.

It is said to be the sheer hard work and dedication of Bipinbhai that has turned Gopal Namkeen into a success story.