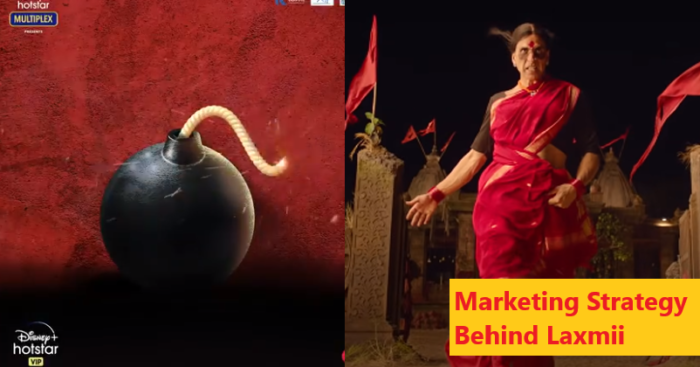 With the new normal in place, the movie industry has decided to make most of the OTT platforms to bring forth their new productions. Apart from all the movies that have been launched recently, Akshay Kumar starrer ‘Laxmii‘ has been the most talked about.

Since the poster launch, people could not stop talking about Akshay Kumar‘s avatar in the upcoming movie. The marketing team made sure to make most of it and created a buzz right from the beginning.

The movie released on 9 November on Disney + Hotstar and has already broken all the viewership records. This record was previously held by Sushant Singh Rajput’s Dil Bechara.

Let’s take a look at the pre-release and post-release marketing journey that ensured the movie created the buzz for its success.

The poster was released in September that was successful in creating a curiosity about Akshay’s transformation in and as Laxmii.

Before the trailer was released, the teasers gave us a sneak peek into the movie’s plot and Akshay’s character. But before that, Akshay shared a post on Twitter as a teaser announcement.

Soon after Akshay Teased the trailer, it was launched the very next day and people were excited to see it for themselves.

Following Akshay’s post, the dialogue snippets were released on Youtube that did the magic as expected. Akshay’s avatar in a saree was enough to indulge the audience.

Akshay’s movies are known to have exciting soundtracks in the movie. The Burj Khalifa song gained a lot of attention and people seemed to enjoy it thoroughly.

Bam Bholle song also had rave reviews and created a lot of buzz in the viewership.

With the song release, the social media challenges exploded, and viewer engagement was imminent.

Netizens were quick to follow the dance challenges and the internet got flooded with people sharing their version of Burj Khalifa Dance. From social media influencers to fans, everyone was dancing on the beat of Laxmii.

With the theme of the movie, the makers extended their support with the third gender community and started a campaign ‘Ab Hamari Baari Hai’. The face of the campaign was transgender rights activist, Laxmi Narayan Tripathi.

An Instagram filter was also introduced honoring the ‘Laal Bindi’ in support of the third gender community.

The stars visited The Kapil Sharma show and went through a laugh riot while promoting the movie. Kapil Sharma also shared a tweet wishing the best to the movie.

Thank you for all the love n fun we had on shoot after so long paji 🤗🙏 u were on fire 🔥 as always.. lots of love n respect ❤️🙏 best wishes to u n the whole team of #LaxmiBomb #LaxmiBombontkss #TheKapilSharmaShow 🤟 https://t.co/eA28HA1k3G

Kiara Advani & Akshay Kumar shared posts of fans sharing their art and love for the movie. Whether it was fan art or a makeup look going with the theme.

Wow, that’s bang on, reminded me of the poster shoot day 🙂 Thank you for recreating…really appreciate the effort 🙏🏻 https://t.co/y0GXI6DuHn