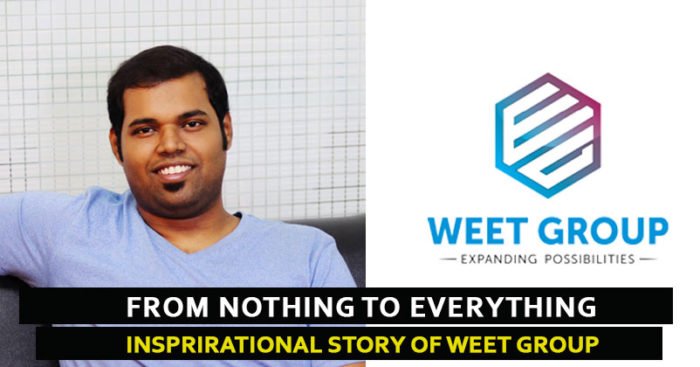 India’s Personal Care market is on its rise as the income of middle-class people is increasing. The change in lifestyle has made Indians spend freely to look and live good. A Chennai-based startup named Weet Group has become a popular brand in beauty products and consumer durables within a year with an impressive net worth of over Rs 6 crore. Below you can read how it all happened:

The man behind Weet Group 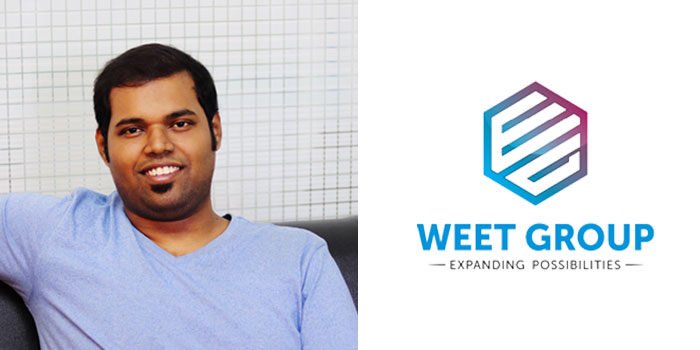 Keeping entrepreneurship on his mind, in early 2016 he started a media based company in the name of WeetNow which focuses entirely on lifestyle and provides information on women’s health and wellness.

Ganesh Kumar, holding a degree in mechanical engineering is a successful digital marketer in today’s date running Weet group and its parts. He built WeetNow Website inviting experts to write all the women related issues and now it holds all the women across the country to stick to their website with over 12 million followers on Facebook. Soon, to bring his business forward he launched beauty products and home appliances. He says the idea to launch beauty products came in his mind when people used to comment on the articles asking queries about women’s skincare brands which ultimately led to his light bulb on.

Ganesh Kumar, 27 years old, the Founder of Weet Group says “ I realised that this was a business idea for which I traveled all the way to China to consider bringing beauty creams and durables which will be helpful for the Indian women.”

Ganesh Kumar holds Weet Group, which is the group company that controls a media website, an e-commerce site selling five different brands under its name.

He learnt to run a business while working in startups from 2012 to 2016 which he doesn’t want to reveal the names of the companies. In these years he got a chance to learn ways of marketing and operations and most importantly the detailed version of doing distribution.

In early 2016, he started weet group with the initial investment of 1.2 crores from his own savings and also took some help from his family funds. After launching Weet Group, he took one step forward by launching Weetmart, an online platform holding anything to everything. A platform selling company products directly to the customers.

The first product the company gifted to their customers was Weetohair. WeetoHair is a bun maker made up of polyester which is very easy to use to get the most stylish buns and other trendy hairstyles. You can get more than seven different hairstyles just alone with this band.

Once they launched their first product in the market and loved by many women across India, there was no turning back especially when his father being his backbone.

After returning from China he realised that he could create his own brands with proper Research and development consultants. He returned ofcourse having two different ideas on his mind. One was to launch acne removal mask and another to launch garment steamer for ironing the clothes.

Ganesh adds, ” I chose the diverse product line because data from my media website Weetnow told me that women wanted these specific types of products.”

Somewhere around April 2017, Ganesh started selling acne removal mask in the name of Laknew which won 5000 plus customers within a few months of its launch resulting in being a successful brand in today’s date. Laknew is a natural illuminizing face mask helps to remove acne, pigmentation, blackheads and whiteheads from the skin making the skin look fairer and glowing instantly.

The company also started selling along with Laknew foot peel of mask called Glaze Foot which helps to remove dead skin cells from the feet making them feel baby soft.

Both being the in-house brands designed in India but manufactured in India. The company is selling both the products at the same pricing of Rs. 1,499 per unit.

He also started selling a product which worked as a revolution in the world of ironing clothes. This amazing product which is named as RapidSteam2000 were priced at 4,999/- is designed for Indian conditions to remove the difficulties of traditional ironing. This revolutionary product heats up only in 20 secs and works on any type of fibre giving you perfectly ironed clothes without any spills, burns or other marks. Then the company launched Dentpik to cover the dental market. Dentpik is an oral irrigator used to do flossing of your teeth on daily basis which helps to remove plaque and food debris to protect you from having cavaties and completely cleans the mouth within a minute or two.

Weet Group currently sells five brands under its name – WeetoHair, Laknew, Glaze Foot, RapidSteam2000, Dentpik. And it also holds two products which are WeetNow and Weetmart. Company uses platform of Weetmart to sell it’s brands and WeetNow to market the brands with native advertising and stories.

Ganesh claims Weetmart sells 100 plus products a day and will increase its sales to 1,000 products over next 12 to 15 months from now. He soon plans to launch Weetkart – a platform for selling products overseas for the US/UK market selling directly its costomers. His future products also includes Weet TV which will be the platform holding videos covering different aspects.

The company upcoming brands are BeingMother and Ayurkaya which however, Ganesh does not want to disclose the timeline for the launch of new brands and products.

Being Mother will be the platform for mothers across and India and their babies holding all the related information and soon to be launched all kinds of babies product.

Ayurkaya however will be the ayurvedic brand where the company is soon is planning to launch paraben free health and cosmetic products which will be 100% natural and without any side effects.

Along with selling brands and providing products to its customers, Weet Group is also doing some good deeds and has taken a step towards Humanity in the name of Wilaap which is a NGO which is running the numbers of NGO’s ideas under one umbrella, all of them are dedicatedly work for the needy kids and children, Teenagers and elderly people. This will be a upcoming foundation of Weet Group.

Today with investors willing to put in their money in promising brands, making dreams come true is becoming easier and also scaling up the brand to another level is far more achievable.

WeetGroup is not looking to slowdown as the company is planning to raise funding of 10m$ and has already started the process. The growth of this business empire is a perfect example of how thinking in the right direction at the right time can do wonders for the society even after earning handsome money.