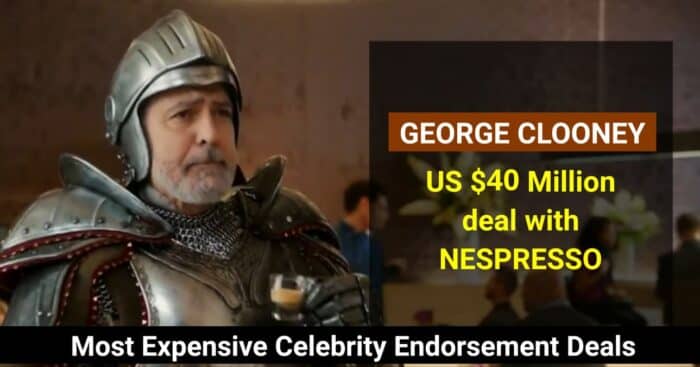 Endorsing a luxury coffee brand Nespresso, got George Clooney a paycheck of US $40 million. For 15 years, he has been the face of the brand and has appeared in several of its commercials.

Taylor Swift has endorsed multiple products like CoverGirl and Apple Music. However, in 2014, she made a whopping US $ 26million deal with Diet Coke to endorse the product.

The beautiful Angelina Jolie has been the face of many a brand. In 2005, she became the brand ambassador for clothing brand St John and earned a massive US $12 million. She also raked in US $12 million advertising for Louis Vuitton in 2012.

The South African-American actress signed a mega deal with Dior- a contract for 11 years’ worth US $55 million.

Julia Roberts made history in the world of endorsements when in 2010 she was paid US $50 million for being the spokeswoman for Lancôme. This French brand famous for its perfumes made a profit of US $100 million since her association with the brand.

She has appeared in several pre-eminent advertisements and endorsements all through her career but the one that takes the cake is her US $50 million Pepsi deal in 2012.

The beautiful Nicole Kidman earned US $ 12 million for a two-minute advertisement in 2004. Directed by Baz Luhrmann, the advertisement is the most expensive ad film with a budget of US $ 33 million