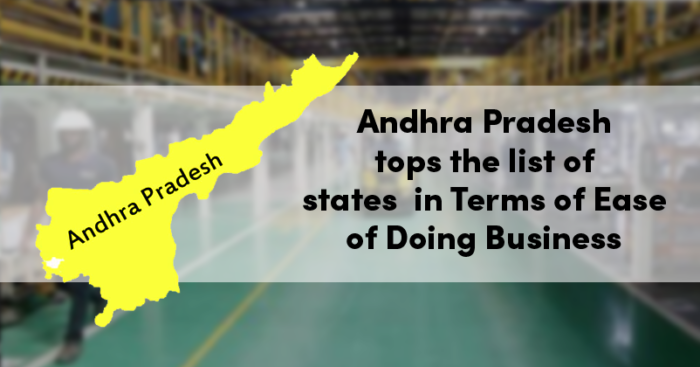 The State Business Reforms Action Plan-2019 (BRAP-2019), has ranked the states in order of representing ease of doing business for Atmanirbhar Bharat. In the ranking, Andhra Pradesh retained the first place.

While Uttar Pradesh stood in the second position, Telangana bagged the third spot in the overall ranking of the state business process reforms undertaken during 2019. This ranking of states has been done by World Bank since 2015 and facilitated by the Department of Industrial Policy and Promotion, under the Ministry of Commerce and Industry (India) of the Government of India based on the progress of states in completing annual reform action plan covering 8 key areas which have a number of points that vary every year.

The ranks were announced by the Department of Industrial Promotion and Internal Trade (DPIIT) during a virtual event chaired by Union finance minister Nirmala Sitharaman.

Union minister of commerce Piyush Goyal said during the event said that the Business Reform Action Plan 2019 released by the Centre contains a list of 80 reforms (187 reform action points) to be implemented by 19 State departments. Andhra Pradesh has achieved 100 percent compliance with the 187 reform action points by DPIIT-World Bank as a part of BRAP 2019.

These are the top 10 states in ease of doing business ranking 2019:

Andhra Pradesh has undertaken several reforms in the last year, ranging from the development of online systems, enhancing transparency to regulating inspections covering the entire lifecycle of the business.