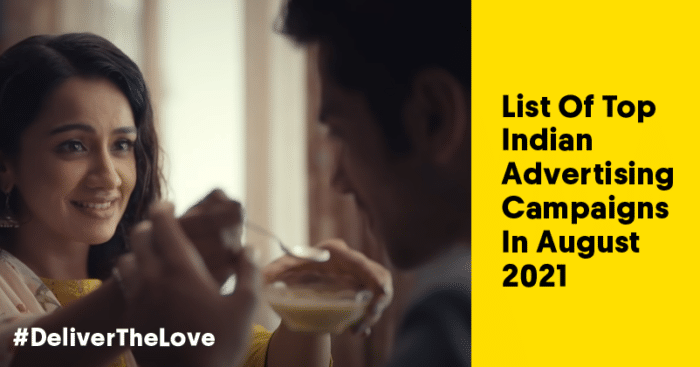 With affordability and easy availability of the internet, the average data consumption per smartphone in India, has increased to 14.6GB per month. It is the second highest in the world, according to the Ericsson Mobility Report of 2021. With web series, stand-up gigs, music videos, and even TV content coming up on the internet in the form of promos and episode snippets, how can advertisements be far behind? These days we even see teasers for lengthy advertisements, which are proving to be the new rage. It’s the longer ads that are unwaveringly climbing the popularity ladder. With good content, a great storyline, complimenting background music all conveying a message, be it social or promotional, advertisements these days are showing a lot of variety, and are also proving to be profitable for brands, as well as creators. Let’s take a quick look at ad campaigns that topped the popularity charts in August 2021.

August saw the festival of Raksha Bandhan and a lot of brand promotions were centered around this theme. However, this Amazon ad with its plot, proved to be one of the top advertisements that struck a chord with the viewers. Centered on a brother-sister bond where a brother tries to hide a sister’s mistake lovingly, and the sister acknowledging this effort as her gift, conveys a brilliant message- ‘Some gifts don’t come in boxes’.

Cult.Fit- #Fitness is not an option

This 30 second ad takes its premise from the climax scene of the cult film Dilwale Dulhaniya Le Jayenge and funnily conveys how fitness is not an option but a necessity.

The Indian barni is symbolic of pickles, groceries as well as savings for a homemaker, in a majority of households since times immemorial. Taking a cue from this concept, and asking the lady of the house to invest in mutual funds which will give better returns, than when storing in a barni, this is one ad that conveys the message of sound financial investing, especially for ladies that run Indian households.

The Indian bride today is no more shy and demure. She’s confident knows what she wants for her big day. And to celebrate this, Malabar Gold & Diamonds features brides from different regions of our country in a 3.16 min ad. With a funky background score, featuring brand ambassadors Kareena Kapoor and Anil Kapoor, this ad has garnered a lot of attention.

The ad celebrates the 56 women athletes who represented our country in the Olympics this year, as well as the innumerable ones who wish to emulate them in future.

Another ad centered around the Raksha Bandhan theme. Done by Cadbury Celebrations in collaboration with Social Hardware, it is one of the most moving ads this year.

A very relevant ad in today’s time. This ad beautifully conveys the plight of small businesses and nudges us to help them in the pandemic era.

These were some of the chart-topping ads for the month of August 2021. Apart from these a few others too struck the right chord with a number of heart-warming messages like those for WhatsApp, Honda Amaze, Royal Enfield etc..