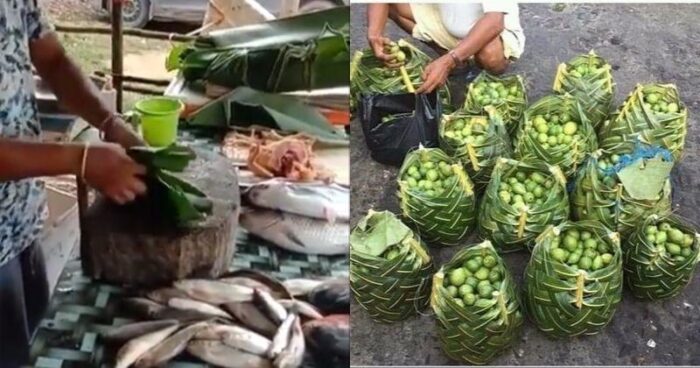 As convenient as plastic bags may be, they all come with an added adverse effect on mother earth. In order to be a part of a positive change, India had not so long ago decided to ban the use of single-use plastic starting 2nd October and looks like the change has finally arrived.

Where on one hand plastic straws can be seen being replaced by paper straws and bamboo straws, local vendors across the country are also seen putting in their best to be a part of this change.

Kiren Rijju, Minister of State of the Ministry of Youth Affairs and Sports and Minister of State in the Ministry of Minority Affairs of India from Arunachal Pradesh recently took to Twitter to share a video that shows local meat vendors using leaves as an alternative for plastic for packing. The video is going viral on social media and people can’t stop appreciating these local vendors for their efforts.

“PM @narendramodi has told us not to use plastics so we are using local leaves because plastics are no more available. A local meat vendor at remote Tirbin, Lepa Rada Dist, Arunachal Pradesh.”

"PM @narendramodi has told us not to use plastics so we are using local leaves because plastics are no more available"
A local meat vendor at remote Tirbin, Lepa Rada Dist, Arunachal Pradesh. pic.twitter.com/Z1vuB2K8fK

Though the new process of packing in leaves is more time consuming as compared to the use of polythene vendors are committed to the cause of not using plastic.

In another pic that is going around on social media, a local vendor can be seen using pine leaves basket instead of polythene and it’s creativity next level.

It doesn't effect on large scale pollution but we must appreciate this small creative ideas to overcome plastic devil. #9DaysOfCreativity @vivekagnihotri pic.twitter.com/sctYGbUo6s

We’re always one change away from making our evnviornment a better place.