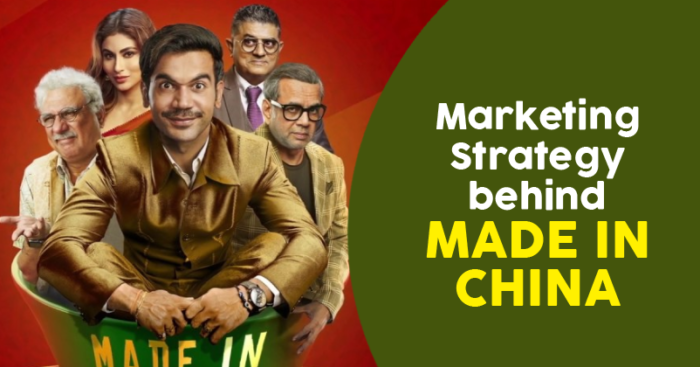 Right from the launch of its trailer, the digital game of Made in China has been on point and extremely strong. We take a look at all the strategies that went behind making it such a huge success

Facing stiff competition from multiple releases, Maddock’s Made in China held its own ground when it came to digital promotions. So strong were their digital campaign that it left all its competitors far behind in the online universe. From influencer outreach to partnerships, associations to content, their performance has been absolutely phenomenal. This has indeed helped the film drive audiences to theatres in massive numbers.

#IndiaKaJugaad – The Hashtag That Got India Talking

The movie started its campaign with an absolute bang with their #IndiaKaJugaad campaign. Starting with the first poster which officially announced its release date. The team followed it up with a fun & quirky campaign where they showcased some hilarious jugaad ideas and also multiple jugaadu ways to get things done. This was a massive hit on social media as fans started sharing their own versions of jugaad.

Getting The Influencer Marketing Game On Point

What can be termed as one of the biggest highlights of the campaign; the build-up to the movie’s trailer launch is a lesson in influencer marketing done right. Contrary to traditional approaches that studios usually take, the movie’s digital team powered by Little Monk executed a fantastic influencer outreach strategy. As a part of this, Rajkummar Rao tagged famous YouTube creators and Influencers on Instagram asking for their help to launch his new product.

Social media sensations like Bhuvan Bam (YouTuber), Mumbiker Nikhil (YouTuber), Be You Nick (YouTuber), Dolly Singh – Spill the Sass (Influencer), Rickshawali (YouTuber), Ranveer Beer Biceps (YouTuber) and Manjul Khattar (TikTok Influencer) replied back to Rao with fun challenges and requests in a barter to promote his product. The team pulled off a rare feat by getting together such an illustrious bunch of influencers to come on board for a single activity at no real cost which is indeed a unique way in marketing a film.
The team however didn’t stop at that. To further amplify the buzz, they got all of Rajkummar Rao’s current & past female co-stars to also put up similar Instagram stories asking about the product and also volunteering to promote it with the influencers. It was kickstarted by Shraddha Kapoor on Monday morning, followed by various of Rao’s other female counterparts such as Vidya Balan, Kriti Sanon, Janhvi Kapoor, Kriti Kharbanda amongst others.

As a result, this generated over 76 Million+ impressions organically across social media platforms around the movie before it’s trailer launch. When the trailer finally launched the next day, it garnered over 20 Million views in 24 hours. The trailer also trended at #1 on YouTube for two days straight owing to tremendous buzz online. This was followed by a plethora of UGC memes that flooded the internet in no time.

Made in China took a lead not only through their strong influencer marketing game but also by acing social media creatives and content that stood out throughout the campaign. Whether it was taking a quirky route by showcasing trailer reviews through a fortune cookie or creating 3D posts. From trending ideas to thematic posts – you name it and the team delivered on every front.

A Masterclass In Promoting Songs The Right Way

The makers took full advantage of the upcoming Navratri week and released two chartbusters – Odhani and Sannedo. The songs became an instant hit across the board with everyone grooving to its tune. But what also stood out was the way the digital promotions were done, where the team again went out of it’s way in populating the song.

It started with the #OdhaniChallenge which became so popular that the song generated over 160 Million views on Tik Tok. Leading dance influencers such as Melvin Louis, Sonali Bhaduria, Adil Khan, Lucky Dancer and many others were roped in to perform specially choreographed pieces with Mouni. Collectively between YouTube, Instagram and Tik Tok, these associations alone generated over 30 Million+ views organically.

Not only this, the team also managed to get a cool on-ground activation where a dance flashmob was performed at Times Square, New York by the group Bollywood Funk.

Throughout the Navratri period, the team chose to dedicate their Instagram stories to the colour of the day and suggest hilarious jugaadu ideas that can be adapted by commoners. The team went an extra mile by organising an epic dance face-off between multiple Garba clubs across the country. Finally, five teams were shortlisted from Ahmedabad, Baroda, Surat, Rajkot, etc to take part in the finale; where Rajkot team emerged victorious.

Partnerships – The Perfect Ingredient For Promotions

Throughout its over 6 weeks campaign, the team ensured that they keep the momentum going through various interesting partnerships that helped in further generating buzz in the digital universe.

In association with the movie, Hike came up with the exclusive Made in China stickers in tandem with the quirky theme of the movie that became quite a hit with fans.

Then came the multi-expression GIFs of Rajkummar & Mouni that were exclsuively made available across more than 10 social media platforms; powered by Tenor & Giphy.

The movie also witnessed an interesting association with Google where the leading cast of Rajkumar, Boman & Mouni featured on Google searches answering the Most Asked Questions On Google.

Get to know @imouniroy, up close on @google. #MadeInChina #MouniRoy #Google

Time for you to know @rajkummar_rao, up close on @google! #MadeInChina #RajkummarRao #Google

Get to know our fav @boman_irani, up close on @google. #MadeInChina #BomanIrani #Google

The team also launched an exclusive experience on Google Home & Assistant were fans got a chance to take part in the movie trivia quiz in an interactive manner.

To expand the reach of this campaign, Made In China partnered with India’s most popular meme platform- RVCJ Media and received a wonderful response. As a part of this partnership, multiple multiple memes were shared on Facebook, Instagram, and Twitter.

This is EPIC 😂 #MadeInChina

The campaign also witnessed continuous efforts by the team to promote the core messaging of the film – the spirit of entrepreneurship. To ensure that the message is driven back home, the team ensured multiple interesting partnerships associated with it.

In association with We Work, an exclusive interactive session was organised which was attended by over 100 startup members. The session titled “Stories From The Silver Screen” was also broadcasted LIVE on Facebook and simultaneously across over 100 We Work centres in the world.

We're back with another session of Stories! Join us as we go live on Facebook with @RajkummarRao and @bomanirani for Stories from the Silver Screen, and get candid about the struggles of achieving professional success. Tune in at 2 pm on Wed, 23rd Oct to attend the session. pic.twitter.com/NsFE4tiqhQ

This was followed by a special contest run on their social media to win exclusive singed merchandise and a screening for startups in the night. Truly a superb way to connect with audiences from a similar background.

Tune in to our Facebook page on 24th October to participate in the Stories from the Silver Screen contest. Answer questions throughout the day and stand a chance to win exclusive WeWork merch signed by @bomanirani and @RajkummarRao! pic.twitter.com/ZZaCBv8iYG

Collaborating with one of the most popular websites for start-ups, Your Story was also an interesting choice. Rajkummar Rao made an appearance at their flagship event, Techsparks 2019 where he addressed the who’s who of the startup and corporate world.

An actor is like a startup founder, we sell talent, they sell idea, says Rajkummar Rao.#tsparks @RajkummarRao https://t.co/Kpihm9AFjv

Striking the right chords yet again, the team collaborated with the most popular marketing website in India for an exclusive video titled, “Raghu Mehta Ke Jugaadu Nuske”. A perfect collaboration with the perfect platform delivered them the perfect target audience for the film.

Success in business can be achieved easily if we follow some basic rules. Watch Rajkummar Rao sharing some Desi nuskhes in his upcoming movie "Made in China"

What can be better than partnering with one of the biggest business magazines in the world to promote the spirit of entrepreneurship? That’s exactly what the digital team of Made in China did. A quick interactive video for social media was followed up by a detailed interview that featured both on their website as well as their print editions.

@rajkummar_rao talks about the perks of being an actor and the downside; how he unwinds, what Mumbai means to him, and more | By @kunaljp; Editing: @chicasha

It has to be said that when it comes to partnerships, associations and influencer outreach, there’s absolutely no doubt that the agency Little Monk has delivered phenomenally. Hence it is no surprise that the campaign witnessed a plethora of content collaborations with a host of top influencers in the country.

This is what went down when our Chabili Patel met #Raghuvir a.k.a #RajkummarRao and #Rukmini a.k.a Mouni Roy selling them potion filled of laughter in this entertaining episode of Pyaar Ki Dawai – #MadeInChina.

“To run a movie for over 6 weeks in itself was an exhaustive experience. But we knew from day one that we need to deliver a campaign which is both unconventional and inspiring. I’m glad that we have been successful in outdoing ourselves by delivering what we had aimed for”.

A collective effort to put in every trick in the book to go all out has what attracted audiences to watch it in theatres despite multiple releases. Behind the success of the film, the digital campaign is one of the biggest contributors as it has single-handedly ensured tremendous buzz for the film, leaving it’s competitors far behind at least in the digital game. Hence, there’s no doubt that this is perhaps one of the best movie digital marketing campaigns of the year and certainly the best from Maddock’s stable so far. It would, therefore, be interesting to see the magnitude of the success of this film.