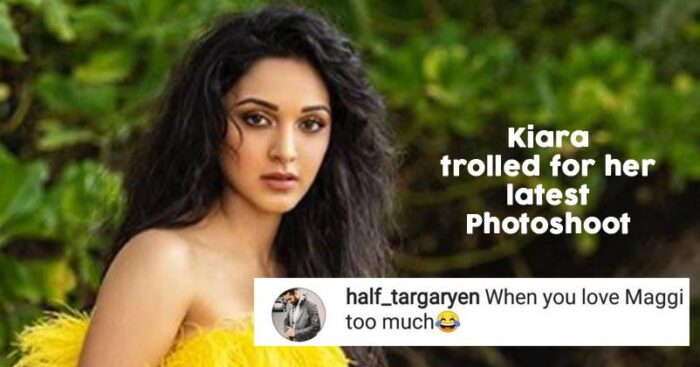 Actress Kiara Advani has been recently trolled over her latest photograph in which she is seen flaunting a bright yellow dress.

In the recent picture shared by Kiara on her Instagram from a photoshoot, she can be seen wearing a yellow feathered dress and while she does look incredibly stunning.

As much attractive as she looked, Kiara attracted a lot of trolls on her picture too. Netizens instantly started comparing her with our very own “Maggi Noodles“.

Comments like “When you love Maggi too much” and “Maggi never looked so good” were seen on her post. Another Instagram user wrote, “When you are bored of having Maggi, make a gown of it. Best way to stop food wastage.” However, Kiara Advani‘s sense of humor is more noteworthy. Kiara gave a hilarious reply to her trolls making us love her even more.

Meanwhile, on a professional front, she was last seen in Shahid Kapoor starer  Kabir Singh, which was a blockbuster hit and broke all records at the box office!  The actress will next be seen in Raj Mehta‘s Good News, Sheershah along with Sidharth Malhotra,  and Akshay Kumar‘s Laxmmi Bomb.

Advani has also signed Netflix‘s Guilty with Karan Johar. This will be the actress’ second project with the director. The duo has earlier worked together in Netflix‘s Lust Stories, which also starred Vicky Kaushal and Neha Dhupia.

Kiara Advani stepped into the Indian entertainment industry with the 2014 film Fugly. However, her breakout film was 2016’s MS Dhoni: The Untold Story. She has also starred in films like Bharat Ane Nenu, Vinaya Vidheya Rama and Machine.