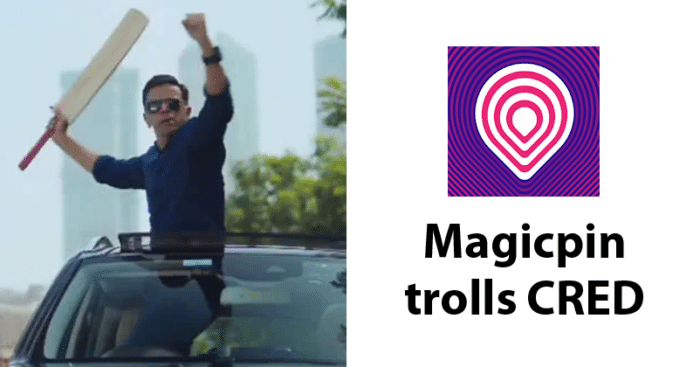 CRED has been gaining a lot of momentum in the financial market. The brand has been marketing its ‘Cred Coins’ scheme for too long now and has attracted many interested takers. But what did the magic was the Rahul Dravid starrer recent ad campaign showing him as the infamous ‘Indiranagar Ka Gunda’.

The ad has gained a lot of popularity ever since and has also taken the attention of a few of CRED’s rivals it seems. Magicpin, a Gurugram-based rewards platform, has taken a dig on ‘Cred Coins’ and even on the much-talked-about ad with their own ad.

magicpin shared the ad campaign on its Twitter handle with the caption ‘You’ve got millions of reward points, but where are you going to spend them?’.

You've got millions of reward points, but where are you going to spend them? Don't be distracted by celebrities! Download magicpin, India's #1 savings app, to save big on food, fashion, groceries, electronics and much more.#AsliSavings #magicpin pic.twitter.com/gS5PDu57vy

The ad is a complete spoof of the won with Rahul Dravid. Not only does it have a similar setup, but it also starts with a young guy who seems to be acting Jim Sarbh’s part in the CRED’s version. Then enters the very talented, Vijay Raaz who tries to simplify Magicpin’s approach in his own way.

What is more ironic is that magicpin’s ad campaign is called ‘The Bread Ad’, which rhymes with… Yes! that’s correct, you guessed it.

magicpin’s representative has stated in a press release as per Brand Equity, “We’ve all watched Rahul Dravid, a distinguished, well-loved celebrity, lose his mind on TV. We love it too. But do we know how this much-touted rewards program even works, or what the reward ‘coins’ are even worth? One insight we encountered was that most Cred users have lakhs of points, but don’t seem to know how or where to use them.” It seems they do put up a valid question.

However, Kunal Shah, the founder of CRED has recently tweeted this.

Mocking someone is accepting lower status.

Brand rivalries are the oldest phenomenon and are even necessary to some extent for a healthy business environment.