Be it the Lok Sabha Elections 2019 or the recently held Maharashtra Assembly Polls 2019 one cannot possibly overlook the role social media has played in it.

Utilizing the digital space in the best possible manner candidates as well as government agencies were seen making the most of social media for campaigns as well as to spread a word about the elections.

With the aim of maintaining law and order and esuring that the citizens step out of their houses for a hassle-free voting process in the assembly elections, route marches were organized in various parts of the state. #MaharashtraAssemblyPolls #Vidhansabha2019

According to the Facebook Ad Library of Chief Electoral Officer Maharashtra, over INR 12 lakh was spent on advertisements between February and October 2019 out of which INR 1.6 lakh was spent in the last week before the voting date — October 12 to 18.

The main aim of running these ads was to create voter awareness on Facebook and Instagram. It was also noticed that the majority of these ads featured Bollywood actor Madhuri Dixit Nene while the choice of language remained English and Marathi. 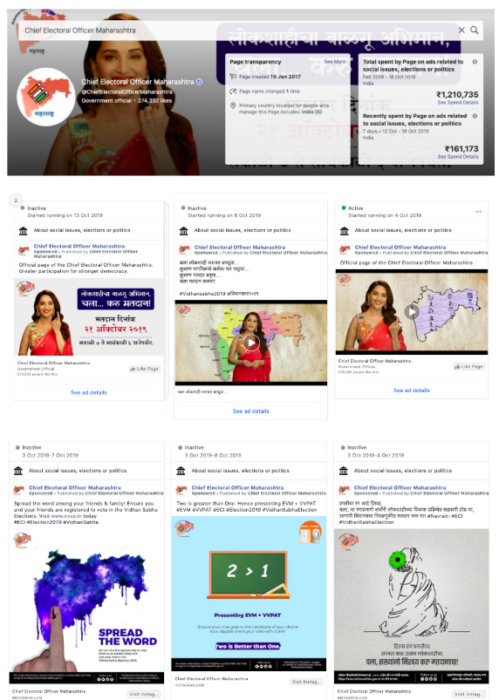 Making use of Navaratri

During Navaratri, an interesting series was run by the page in an attempt to connect with the relevant audiences. The page posted a series of creatives that showed a woman sitting with a flower in her hair that changed color according to the color associated with the particular day of Navaratri. The copy was in Marathi, nudging people to vote. The series was run across social media handles.

In order to reach as many people and raise awareness about the upcoming elections the government also indulged in some influencer campaigning the list of which included social influencers like Gauri Sawant, Usha Jadhav, Smriti Mandhana, Prashant Damle, Nilesh Singit, Nishigandha Wad, Lalita Babar, Rahi Sarnobat, Virdhaval Khade, Mrinal Kulkarni and Madhu Mangesh Karnik. The copies scribbled over creatives were in Marathi and the communication was kept crisp and emotive.

Madhuri Dixit Nene was the prominent influencer in the mix, followed by Sonali Kulkarni, who appeared in a video that talked about a mobile application and facilities for the PWD voters.

The social media presence of Maharashtra Directorate General Of Information And Public Relations (DGIPR) was leveraged by the government to put across updates from the district level up. These included efforts by the government to increase voter awareness, interesting ways in which people were participating the process and updates about government officials gearing up for the upcoming elections.

While the DGIPR has been active on major social media platforms, one of the most interesting paths undertaken by the team was to push out notifications via Telegram, an instant messaging app. A blog too was maintained to document these updates. While the effectiveness cannot be ascertained for sure but the image shows the message being viewed by an average of 3 to 10K people while as many as 47K people subscribed to the Mahasmvad: Maharashtra Shasan on Telegram. 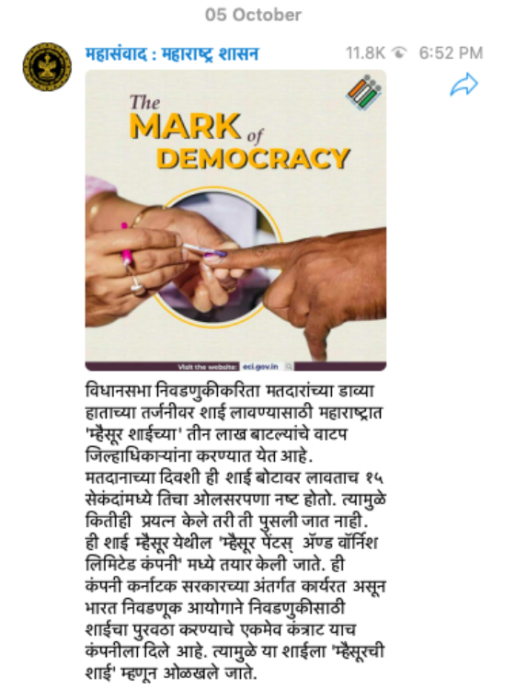 Along with sharing information about identification documents to take to the booth and the general rules which were to be followed, the Election Commission of India also motivated the selfie lovers by creating selfie zones outside polling booths while hashtags such as #GotInked, #GoVote, #MaharashtraAssemlyPoll2019 were seen trending on social media.