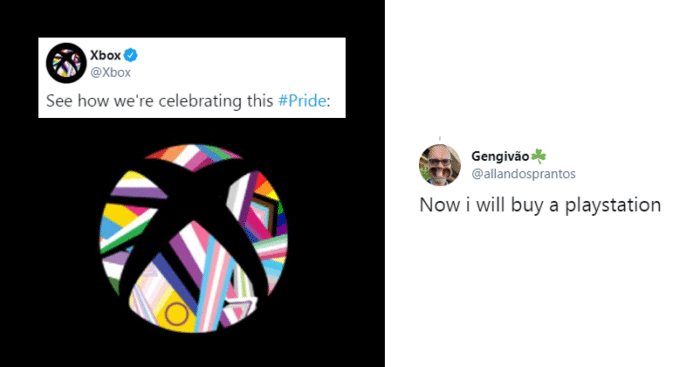 In support of the LGBTQ+ community, various brands change their logos to show their support to the community in the month of June which is celebrated as pride month. It is a time where many celebrate a movement that speaks for dignity, equality, social justice amongst various other human rights that must be advocated across diverse individuals and beyond borders.

However, the individuals who are a part of the community are subjected to quite a lot of negativity, to put it lightly, and it comes as no surprise in times when there is a conflict between traditions and liberalism every single moment. On the first of June which marks the beginning of Pride Month, Xbox, the video gaming brand created and owned by Microsoft, also showed their support by posting their new icon which celebrated the LGBTQ+ Pride Month on Twitter.

We believe everyone in the gaming community should have freedom to be themselves, both when you play and as you live.

Now, someone wasn’t very happy with this and tweeted that they would be buying the PlayStation instead. Although it wasn’t very obvious what he was opposing, the internet decided to call out on the bigotry anyway.

Now i will buy a playstation

I will buy a switch then

What followed is a rendition of tweets involving PC, Microsoft and Linux up until the guy said that he would give up on gaming then and focus solely on sports.

I give up, i will only play sports from now on

This debacle spooked quite a stir on Twitter with everyone pouring in on what they thought about it. Some argued that the debate could have gone on for much longer with the focus shifting to game developers, franchises and even popular faces in the gaming industry as well. With many being connected to this industry, it was easily possible to draw in many more stakeholders into the discussion which could have been held for much longer. The tweet soon went viral and caught everybody’s eye along with the Xbox logo.

oh my god this was an adventure

I would really love this version of the Xbox logo as a badge, t-shirt, and sweatshirt please. 🙂

Proud to be part of the Xbox community, proud to be myself 🏳️‍🌈🏳️‍🌈🏳️‍🌈

While the tweet itself did not catch up on Twitter as much, it got a lot of attention on Imgur. Here are a few comments on the post that created the stir.

While quite a lot pointed it to be an issue against the LGBTQ+ community, many believed that it could also have been a hate thing against companies who use Pride Month as a way of promoting themselves and launching marketing campaigns.