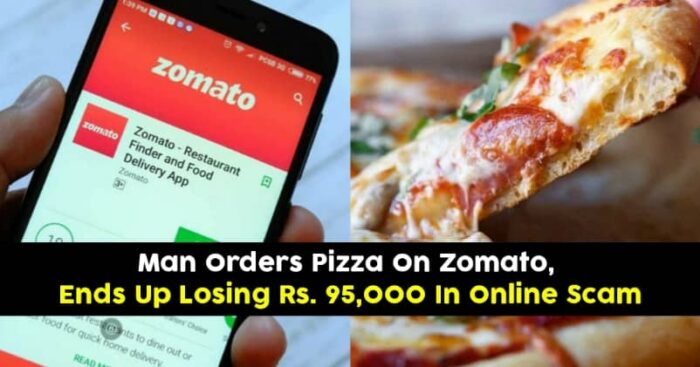 NV Sheikh, a resident of Bengaluru late at night of December 1 ordered a pizza using the online food delivery app Zomato. But according to the police after waiting for over an hour for his order to arrive he looked up the number for the app’s customer care service and that’s where things went down for the lad.

Upon calling the number, he was allegedly informed by the fraudster who posed as a customer care executive that the restaurant was not accepting orders and was assured that a refund would be initiated. He then informed Sheik that he would receive a message on his phone after the call and upon clicking on a link in the message, his refund request would be processed.

As per the Madiwala Police, who are investigating the case, as soon as Sheikh clicked on the link, he became a victim of a phishing expedition and the fraudsters were able to access his bank account details.

Within minutes, Rs 45,000 was deducted from one of his bank accounts and before he could transfer the remaining amount to a different account, another Rs 50,000 were deducted.

Sheik then approached the Madiwala police station in the city and filed a complaint with them. The case is being currently investigated.

The Bengaluru techie had reportedly been saving the money to pay for the expenses of his mother’s cancer treatment.

Speaking to TNM, a Zomato spokesperson said that the company does not have a calling service for customer care.

“We constantly remind our users via different channels of communication that we do not have a customer care number. Chat and email are our primary channels of care. While we take every effort to ensure customer safety and security, we also urge our esteemed customers to be vigilant and not share their personal or bank account details with anyone.”

Cybercrime cases have lately been on a hike with a number of cases being reported regularly. Earlier in November, a man from Bengaluru had alleged that he had lost around Rs 85,000 from his bank account via a UPI pay scam operation.

Tip to keep safe: Do not share your personal details and be extra cautious when using digital forms of payment.