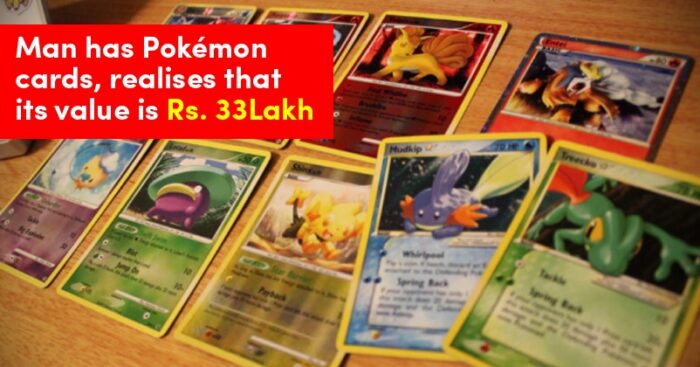 If you are a 90s born kid, there is a rare chance that you have not enjoyed the amazing cartoons that were telecasted on TV during childhood. These days we don’t get to see such characters and even kids enjoy smartphones more than Television screens. Pokemon is one of the most popular cartoon characters among kids and collecting Pokemon cards has been a hobby of many children.

However, Nigel Brooks, a resident of Birmingham, UK, is a very happy man now as he has earned a fortune of 35,000 Euros because of his collection of Pokemon cards. Interestingly, he got these cards as a gift when he was 13 years old in the year 1999. His mother gifted him a pack of collectors’ edition worth 300 Euros (Rs. 28K)

It was quite normal for Nigel at that time and he kept it aside. But presently, he got the shock of his life when he came to know that the card collection that his mother gifted him is a rare 1st edition of Shadowless Pokemon trading cards.

The auctioneer named Richard Winterson told a leading news daily that the collection which belonged to Nigel Brooks is very sacred for the fans of Pokemon. Nigel who is 34 now and father of three kids earned 35K Euros (Rs. 33 Lakh approximately) from his collection of Pokemon cards.