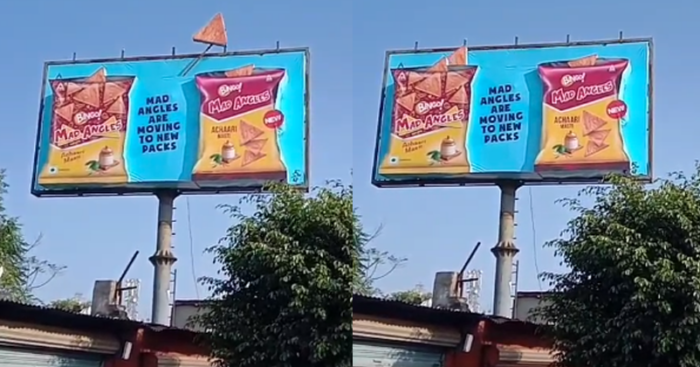 We come across billboards featuring different brands on a daily. Nowadays, companies are focusing on making creatives more engaging by bringing in a life-like element in them. ITC’s Bingo did something similar this week by unveiling its revamped packaging design for its Mad Angles variant.

Even though the design of the package has changed, the company assured its customers that the triangular, wafer-like shape is still consistent and the company stays committed to the flavor. To attract customers and gain their trust, Bingo decided to go one step further by having an animated billboard design. There are two packets of the Mad Angles side by side  – old and new. The animation shows one Bingo chip coming out of the old packet and going into the new one. How innovative is that?

So if you happen to come across this billboard, you would definitely stop and stare to understand if this is actually happening or just a video that you see.

The Concept Behind This Advertisement

Ogilvy Bangalore conceptualized this idea which was implemented by the out-of-home specialist agency Kinetic India. Kudos to the creative team for this execution!

Bingo has always been a quirky brand for most of its youthful customers. The idea was to switch from the old to new by showing customers that the flavor and shape of the Mad Angles remain the same. They did justice to this idea by implementing exactly that by showing customers the animation from one packet to another.

People have shared many videos of the billboard and circulated it amongst their circle online. This is also the reason why Bingo Mad Angles are now trending on most social media platforms including Facebook, LinkedIn, Twitter, and Instagram.

Also Read: This Is How Much It Costs To Put Up An Ad On New York Times Square Billboards

So far, the company has managed to put up its animated billboards for Mad Angles in Delhi, Kolkata, Vizag, Guwahati, and even Gurgaon. If you haven’t seen the advertisement for the new Bingo Mad Angles, have a quick look below.

Have you come across some other creative ad campaigns recently?