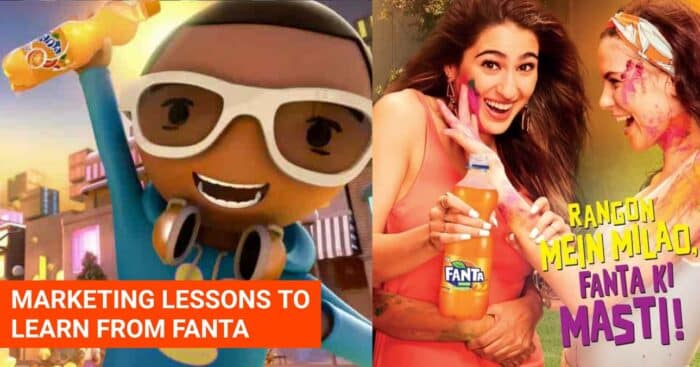 Fanta has always made sure that it creates a campaign that aligns well with its brand image. The company has always been about a lively and playful theme. The fun orangy flavor has always been its USP but the brand has always presented its A-game when it comes to marketing.

From fun, 3D characters to roping in the lady luck, let’s take a look at the marketing evolution of Fanta that has made it a sensation in the country over the years.

In early 2010, Fanta was all about being fun and playful. That was something that was clearly seen in the brand’s ad campaign back then. For almost a decade, Fanta used 3D characters and a playful creative to market its product.

The brand has always felt that Fanta has a special place in the market and its consumers relate to its naughty orange taste.

That was the theme of many video campaigns by the brand back then ‘Orangy Naughty Bubble’.

In 2012, Fanta introduced a very creative approach while marketing its ‘Taste that makes you jump’ campaign.’

Highlighting the fun and excitement one feels while enjoying their favorite beverage, the 3D animated film’s Indian adapt was designed by Ogilvy & Mather.

While speaking on the campaign back then, the company representatives stated that the creative fits perfectly well with Fanta’s playful imagery and the great ‘Orange flavor’.

Brands have always ensured to rope in the start power as much as they can while making a new campaign. From the early 2010s, Fanta has featured many leading ladies of the industry in their video ads.

Rani Mukerjee, Genelia D’Souza, Shruti Haasan, Sara Ali Khan are some of the many actors that we have seen making a Fanta ad more lively and fun to watch.

Reinventing For The Future Generations

Fanta has always been reinventing and innovating itself when it comes to marketing and promotion. Over the years, Fanta’s fan base has only increased and it is because of this popularity that the brand has stayed strong in the market.

For its latest ad campaign, Fanta was sure to connect with the youth with modern creative.

Fanta’s Brand Director Tutul Rahman believes that the new creative brings a ‘modern twist’ to a brand that has always embraced the passions and values of its young, fiercely independent fanbase.

Fanta has always been so much more than just a sparky orange-flavored thing. The new campaign is named ‘Its a thing’ which tells so much about the brand itself.

The campaign was launched in July with digital videos focused on four of Fanta’s most popular flavors – Orange, Pineapple, Strawberry, and Grape.

Each creative has a story to tell around the individual flavor of the product.

As per the company, “It’s An Orange Thing” is inspired by teens’ enthusiasm and passion seen on social media.

“It’s A Strawberry Thing” is powered by teens’ love for music discovery.

“It’s A Grape Thing” is all about self-expression.