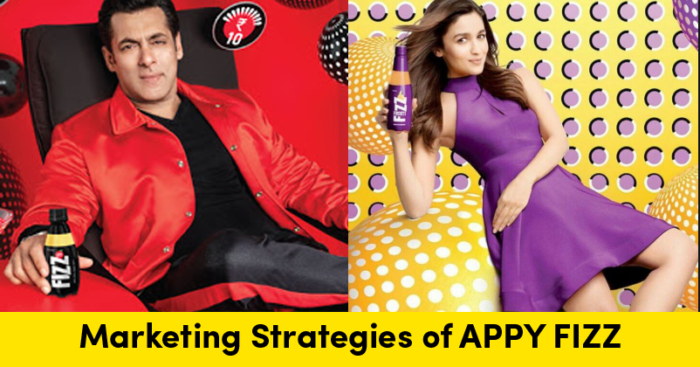 The tale of Appy Fizz is an interesting one. Launched into the market in 2005 by Parle Agro Pvt. Ltd, Appy Fizz is the most loved fruit-based fizzy drink in the Indian market. All thanks to its cool bottle shape and super cool packaging, and great marketing strategies too.

Nadia Chauhan, joint managing director and chief marketing officer, Parle Agro, said in 2018, “We aim to build Appy Fizz into an over ₹ 1, 000 crore brand in the next two years.”

In 2019, there were reports that according to the company, “Appy Fizz is set to become a ₹1,000-crore brand this year.”

Let’s look into the marketing strategies of Appy Fizz.

Appy Fizz was launched in 2005. It was launched as India’s first carbonated apple juice without alcohol. It was promoted as a healthier alternative to other soft drinks in the Indian market. But the limelight was super cool bottle shape and attractive packaging. Many people just gave a try to the drink for its cool packaging, and its Apple juice taste, which was new to Indians in the soft drink category did the rest.

Appy Fizz Ads: A Cool Drink To Hang Out With

In 2006, the company launched a series of TVCs which were able to create necessary buzz and brand awareness.

In 2012, Parle Agro Pvt. Ltd. associated with Saif Ali Khan to endorse Appy Fizz and that too was a successful endeavor.

In 2013, Appy Fizz started its summer campaign with Saif Ali Khan which was an instant hit. According to reports, the hashtag #SaifNFizzhangout trended on Twitter and accomplished nearly 40k tweets. The campaign had created a buzz on Twitter timelines of over 4.55 million users and added 200% new followers.

Feel The Fizz With Priyanka Chopra

In 2016, Priyanka Chopra associated with Appy Fizz to give boost to the brand.

In 2017, Appy Fizz collaborated with Salman Khan and launched a Bigg Boss edition Appy bottle. Since then, there is no looking back for Appy Fizz. From #RiseUp campaign to #FeelTheFizz Appy Fizz invested a lot in marketing and it is paying big to Appy.