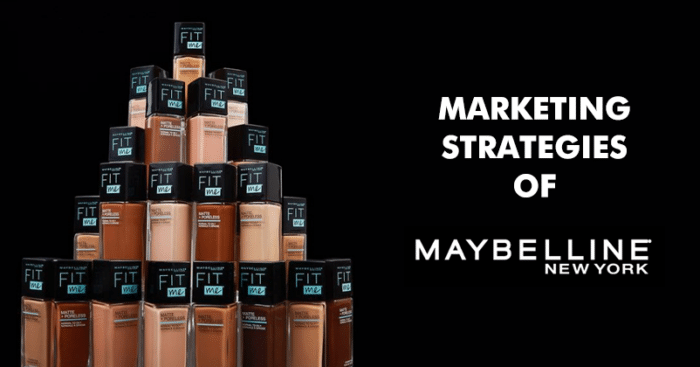 According to a recent ShareIQ analysis, Maybelline has so far this year displayed the best level of brand loyalty among cosmetics companies across visual social media platforms. It now has over 10 million Instagram followers, which is four times as many as its main competitor, Revlon. While companies like Estee Lauder and CoverGirl lag with a combined total of 60,000 followers, Maybelline presently has more than 100,000.

What marketing approach, therefore, underpins Maybelline’s success? This post from Marketing Mind will describe the marketing strategies Maybelline has used throughout the years and the lessons you can learn from them.

Maybelline: Where It All Began

The American cosmetics company Maybelline operates throughout the world. This is a product of the L’Oréal cosmetics company in France. A teenage entrepreneur founded the Maybelline company in 1915. His sister, Mabel, who utilized everyday items to make up inventively, inspired him. On make her eyelashes appear darker and sharper, she would apply a mixture of Vaseline and powdered coal dust to them.

Thomas created Lash-in-Brow-Line, his first product, with the help of a small bit of chemistry. Later, to memorialize his sister, he changed the spelling to Maybelline. He then created one cosmetic item after another before establishing his business, Maybelline.

What marketing strategy does Maybelline have?

The Maybelline marketing strategy aids in the brand’s/competitive company’s positioning in the market and the achievement of its corporate goals & objectives. 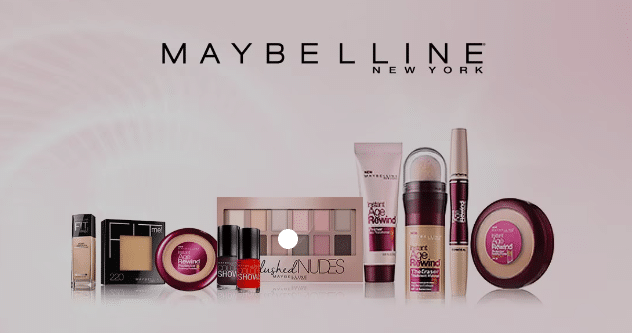 Products from Maybelline focus on development, style, and colors. It produces products associated with skin mix in the most intense colors and is regarded as a color specialist. About 200 goods make up its portfolio, which includes products for: 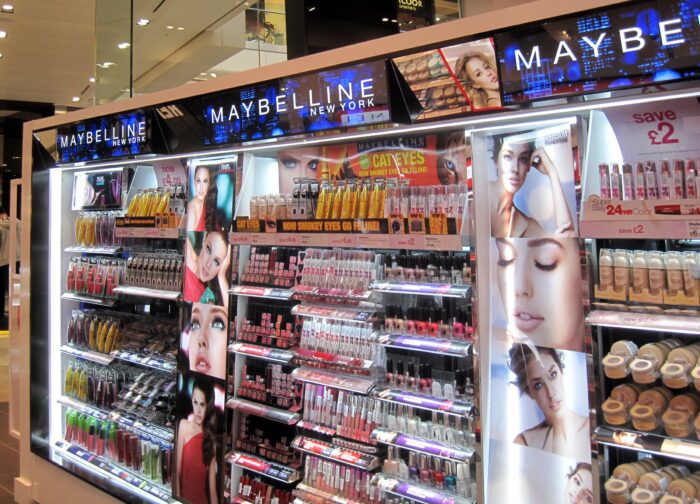 The Maybelline marketing mix’s distribution plan is as follows:

Maybelline doesn’t offer its goods directly to consumers. They use pharmacy shops, supermarkets, malls, and retailers in mass marketplaces to distribute their goods.

Customers may pick from a wide range of products and colors on the website of the Maybelline firm and either purchase from online merchants or use the shop finder feature to identify the closest store that carries the chosen product using zip codes. The official website offers a virtual cosmetic studio that enables customers to try out various items virtually on themselves before making a purchase. 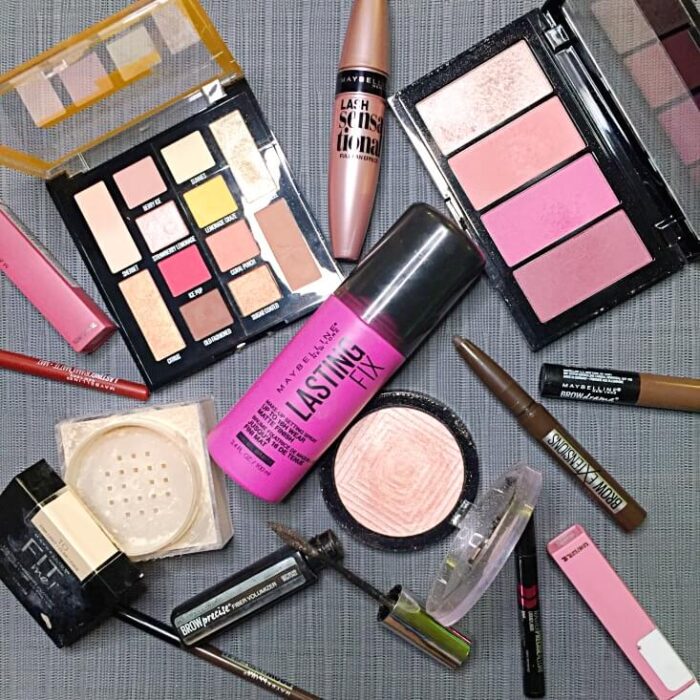 Maybelline has envisioned itself as a business with an alluring, sophisticated, smart, hip, and unflappable image that is bold as well as contemporary and has a nuanced perspective. It aims to give open beautifiers to every lady and is directed at the higher and white collar level sector of society. Since Maybelline includes subjective things, it has been evaluated using a mid-premium methodology.

The company has implemented a serious valuation strategy to raise some wiggle room in consumer promotion since it is against fierce competition from other rival companies. It has maintained its show typical at standard levels in comparison to rivals, and this has enabled the cosmetics sector as a whole to capture a larger market share. 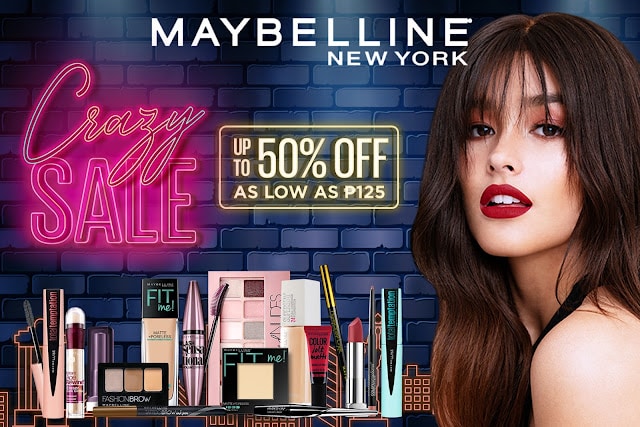 In regional periodicals and newspapers, Maybelline offers promotional coupons and discounts. The clients may also register for their newsletter, which will be distributed to their inboxes and contain information on pertinent deals, promotions, and newly released goods. Maybelline promotes and advertises its brand using every media outlet available. Maybelline aggressively promotes its whole product range through print, web, and TV commercials. The brand plans several international events, exhibitions, and beauty pageants. The firm utilizes coupons to give discounts and other value-added services to its customers to keep them interested and reward their loyalty. Thus, this completes Maybelline’s marketing mix and approach.

Any company’s success depends on its ability to raise awareness of its goods and promote discourse about them in the media. For the Maybelline brand, marketing and advertising initiatives are extremely important. These ads assisted in raising brand awareness and revitalizing it after a time to encourage customer loyalty. The famous Maybelline advertising campaigns listed below should be taken note of.

Maybelline Fit Me As I Am Campaign
Fit Me As I Am is a different Maybelline commercial campaign. Maybelline urges the people it wants to alter to step outside of its comfort zone. The famous people included in this campaign served as a reflection of the attitudes and fashions that were popular at the time. The campaign made use of a variety of female celebrities who highlighted their experiences of overcoming obstacles to reach new heights.

MAC- Their primary goal is to fulfill the diverse needs of customers and skilled cosmetics artisans. MAC is thought to be among the best Maybelline competitors due to its variety of products.

CoverGirl- They create a vast selection of products to suit all skin types and the whole range of cosmetic needs from head to toe. Covergirl is recognized as one of the leading Maybelline rivals in the globe due to its extensive product lineup and accessibility.

Colobar- Because of its major focus on quality, all of its products have been authorized by Market Research Corporation to meet consumer demands and the commercial organizations it considers. Colorbar is regarded as one of the main Maybelline competitors because of its extensive product portfolio.

Revlon- Several prominent celebrities, including Emma Stone, Ashley Graham, Halle Berry, and others, are linked to this band. Revlon is regarded as one of the biggest Maybelline competitors because of the variety of products they make available to customers.

Who are Maybelline Brand Ambassadors

The marketing plan for Maybelline has indeed included ambassadors. In this way, it promotes its goods around the world by working with important ambassadors and famous people. Also notable among these celebs are:

The company and model Gigi Hadid worked together to develop a number of goods that were influenced by the cosmetics she used. Indeed, the debut of this “Maybelline x Gigi Hadid” collection was a huge hit.

Maybelline has effectively increased its percentage of client loyalty by making dependable cosmetics. To differentiate itself in the cosmetics market and interact with its customers in fresh and creative ways, the company uses the many marketing methods discussed in this article. The brand is well-positioned to thrive in the sector for a very long time with the correct Maybelline advertising methods.