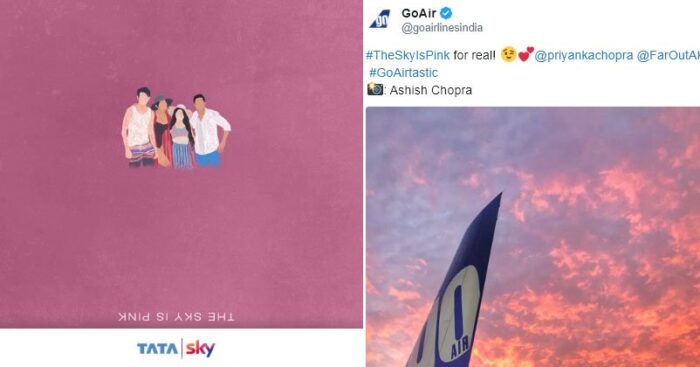 Priyanka Chopra Jonas, now the global icon recently made a comeback to the Hindi Cinema after a long break with the Friday released “The Sky is Pink” which also stars the super talented Farhan Akhtar.

Directed by Shonali Bose and Produced by Ronnie Screwvala, the movie is a narration by the already dead, Aisha. She develops Pulmonary Fibrosis, a rare immune deficiency syndrome, post a bone marrow transplant in childhood.

While the movie is sure to take you on an emotional ride with the stellar performances by the brilliant actors, here’s how it performed in the marketing world.

The 3-minute trailer released on Youtube managed to garner over 310 million views and 448K likes. Priyanka Chopra Jonas also personally thanked the viewers on the teaser post on the channel for showering the cast with so much love.

The movie witnessed some prominent brand-integrations with collaborations from across the industry in the quirky pink-way.

‘The Sky is Pink’ is an emotionally stirring story about the Chaudhary family and their zest for making every moment count starring @priyankachopra and @faroutakhtar. On a scale of 1 to 5, how excited are you to watch this movie? Comment below with #KuchNayaDekho. #TheSkyIsPink #PriyankChopra #Priyanka #Farhan #FarhanAkhtar #Movie #Movies #Friday #Friyay #FridayRelease #NewRelease #Bollywood #BollywoodMovie #Like #Follow #InstaFriday #InstaMovie

Brands across all social media channels promoted the movie with some interesting and engaging contests.

UC Browser asked the viewers to cite their reason to watch the movie and in return win free tickets.

#ContestAlert #TheSkyIsPink
The Sky is Pink is an upcoming inspiring movie about a family that stood the test of time. Can you name the four main characters of that family in the movie? Comment your answers below to win tickets of the movie- In theaters 11 October 2019 pic.twitter.com/IM8XQ2Lzq4

Congratulations to the winners of the ‘Tag & Win’ contest: Sapna Varshney Archana Kadam Yavnika Sood We thank everyone for your enthusiastic participation. The winners will be contacted via DMs soon. . . #Incred #TheSkyIsPink #contestwinner #contest #borrowwithconfidence

Going all candid Priyanka Chopra decoded a series of her tweets on Twitter and spoke about her signature one-liners, married life, and her latest release.

The incomparable @priyankachopra takes us #BehindTheTweets to talk about her signature one-liners, married life with @nickjonas, and her new film #TheSkyIsPink pic.twitter.com/2Ip6iXJaW2

Realizing the power of influencer marketing and content marketing “The Sky is Pink” star Priyanka got on the promotional bandwagon with popular influencers and brands on various platforms.

2. Ma Wokeanand on the Pink Lane with Kusha Kapila

NEVER EXPECTED THIS ANSWER BY PC 😅♥️ Watch my full Video with @priyankachopra on my Channel and see us do the Pink Challenge together!! My Respect and love for her has grown 3000 times and I love you 3000 times!! You truly are and always will be my Inspiration!!! ✨ Swipe up on my stories or click the link in my Bio to watch the Full Collab!!! #TheSkyIsPink #PriyankaChopra #Bollywood #Rickshawali #memes #meme

Actors #PriyankaChopra and #RohitSaraf, who will soon be seen in their film #TheSkyIsPink, put each other’s potential to discern lies to test with an entertaining game of ‘Two Truths And 1 Lie’. Watch https://youtu.be/t8kBrDDDOwg @priyankachopra @rohitsaraf10 @rsvpmovies

What is social media without social media trends! Team PC leveraged the #TrendingFormat of two arrows to decrypt the message with a Pink twist.

You guys have shown us immense love for so many years. Let’s show some more love to this… #TheSkyIsPink @priyankachopra #TrendingFormat

7. The Diva takes the promotional route through American talk shows and tours!

Of course! The added privilege of having PriyaTnka Chopra as the lead. The global star also promoted her movie in New York at some of the most popular and watched talk shows.

"It's the kind of movie, I think, that brings families together. And in this world, I feel like we need that." @priyankachopra says of her new film #TheSkyIsPink pic.twitter.com/QwqQQ350kA

Talking #TheSkyIsPink(after Hot Ones wings 🔥) on @FallonTonight at 11:35pm EST on NBC! Hot sauce 400x spicier than a jalapeño…don’t try this at home!! @jimmyfallon pic.twitter.com/JZmgdiFz4B

8. The Word Beat with Team PC

Play and Slay! Team PC on Instagram posted a video and asked the audience to comment with the missing word from the lyrics.

This word beats faster when you meet the love of your life! Let us know in the comment section below 😉 ❤❤❤ #TheSkyIsPink @priyankachopra

The Sky is Pink is based on the true story of Aisha Chaudhary who in real-life turned a motivational speaker as she fought with her fatal disease.

Aisha Chaudhary was a motivational speaker, on whose life the film #TheSkyIsPink is based. Aisha was born with SCID (Severe Combined Immuno-Deficiency), a potentially fatal disease, and while she passed away in 2015. #mondaymotivationhttps://t.co/AVgTjRvsPa

My Little Epiphanies(the sky is pink) . **don’t let anyone define what your sky should be** . The book is all set to hit the big screen today. I cannot wait to see this movie. The sky is pink starring Priyanka @priyankachopra and faran @faroutakhtar get ready to feel deep emotions and cry. . I’m not sure whether my review is appropriate or not but this book made me realize life and death. . I cannot put my exactly feeling about this book. . First, understand SCID- it’s a medical condition where our own immune system attacks on our own body make our life hell. It is very painful 😔 ( please google and understand more) . Let’s get into the review, . Aisha was born with SCID. This book is a collection of thought before she left the world. When you start reading it you will actually feel Aisha’s words. This book also comes with doodles that give up hope. . Aisha spends most of her life in bed. . It’s a very short book. But, each word each sentence will touch your soul. . After this, I just can’t wait to watch the movie. I if you want to know how I’m feeling just go and pick up this book. All set for today! Hope you will go and watch #theskyispink by Director @shonalibose_ with @priyankachopra @faroutakhtar @zairawasim_ @rohitsaraf10 A great thanks to @bloomsburyindia For this book♥️ #aisha #theskyispink #theskyispink♥️ #ronakshah . . .

The Ishq FM channel was not far behind from turning Pink for the movie which released today.

Priyanka Chopra took to Twitter asking her fans to post the pictures of the pink-hued sky one day prior to the release of the movie.

“And the sky sure is pink!!!” . . This stunner of a sky was seen by me yesterday for just few minutes with the moon shining in the middle like a beauty. And a movie with the same name releases today what a coincidence to actually find a sky thts actually pink💗💗 Just believe and it comes true!! . . . . #phogotograhy#nature#naturephotography#nature_photo#nature_perfection#nature_brilliance#photograph#photography#photooftheday#photographers#photographylovers#photograhyislife#photocomposition#naturelovers#natureromantix#fiftyshades_of_nature#gameoftones#ig_captures#ig_nature#nature_captures#wanderlust#sky#skyline#sky_brilliance#insta_sky_lovers#cloud#moon#skylover#pinksky#theskyispink#

The movie received a heartwarming response from Bollywood, the audience and guests of the special screening event held in Mumbai.

#TheSkyIsPink is a film that understands and breaks down the specifics of grief, unravels the lingering agony of trauma and argues that the fragility of life is precisely what makes it so precious. It’s a happy film about unbearable sadness. Review: https://t.co/ARQ3eXGGH9

Just saw The Sky is Pink. There’s so much to say and yet I can’t find the words. Somethings are better felt than said.
It drained me and yet filled me at the same time.
INDEED #TheSkyIsPink@roykapurfilms@FarOutAkhtar@priyankachopra#ShonaliBose