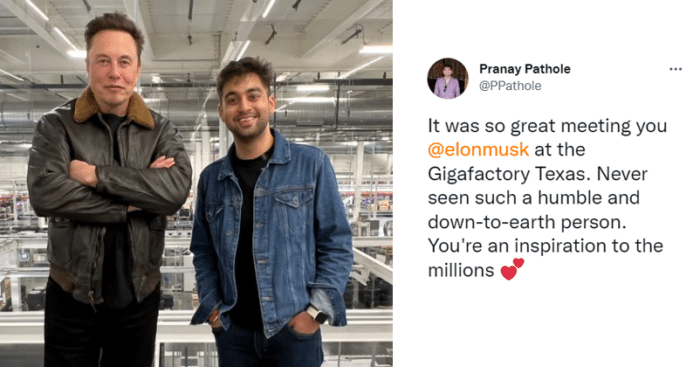 It is very common for people to stay connected with each other through social media. People are today able to contact their friends who live in entirely different parts of the world.

While we all may have one such friend with whom we are connected virtually, did you know who the world’s richest man’s virtual friend is?

Pune-based IT professional Pranav Pathole recently shared a picture with Elon Musk that has left us all wondering about the connection they have.

It was so great meeting you @elonmusk at the Gigafactory Texas. Never seen such a humble and down-to-earth person. You’re an inspiration to the millions 💕 pic.twitter.com/TDthgWlOEV

Since being shared, the post has received over 50k likes and more than 1900 retweets. People have been both surprised and happy for the two ‘virtual friends’ to meet after all these years.

Pranav got connected with Musk in 2018 when he tweeted about Tesla’s automatic windscreen wipers and the issue with it during the rain. Musk then responded to his tweet and said that it would be “fixed in next release”.

Fixed in next release

Since then, Musk and Pathole have responded to each other on Twitter and exchanged emojis, and talked about many things. All while millions of people online would just sit and read the interaction between two friends.

They both have shared common ideologies which have shown in their exchange every now and then. Pranav recently asked Musk why Tesla receives so much bad press & negativity compared to other car manufacturers. To which Musk simply replied ‘Because Tesla doesn’t advertise and other car companies do.’

Their meeting surely became the center of the topic all over social media, though the reason for Pathole’s visit is not yet clear.