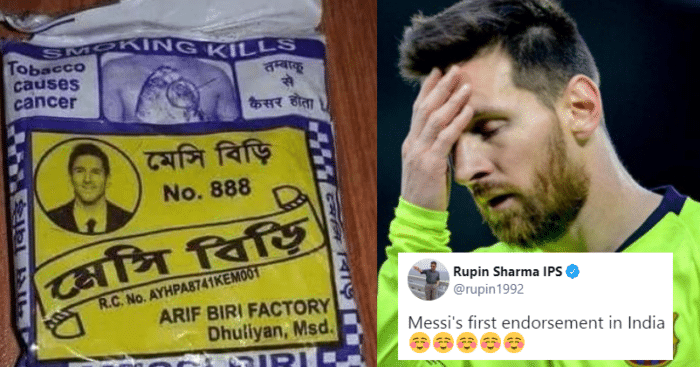 In the most recent turn of events that have unfurled, a small bidi brand in India has put up Lionel Messi, the globally acclaimed football player’s face on their packaging. And no, Messi has definitely not endorsed the beedi brand!

After John Terry who has seen his face on Gold Flakes, Messi is the second footballer who has been found on cigarette packaging!

Nonetheless, this has left the Twiteratti community sharing the packaging and commenting their take on finding Messi on a bidi brand.

After his first major Cup win for Argentina, Lionel #Messi finally gets his first endorsement contract in India..#MessiBiri pic.twitter.com/dMR36mmUM1

So Ajay Devgan has a competition now. #zubaankesri

Messi is everywhere in India 😅🤣 https://t.co/wwTOyCJByg

To think that the fittest athletes are cast on beedi packaging that are so detrimental to health is definitely a blasphemy on its own. What is your take on this debacle?