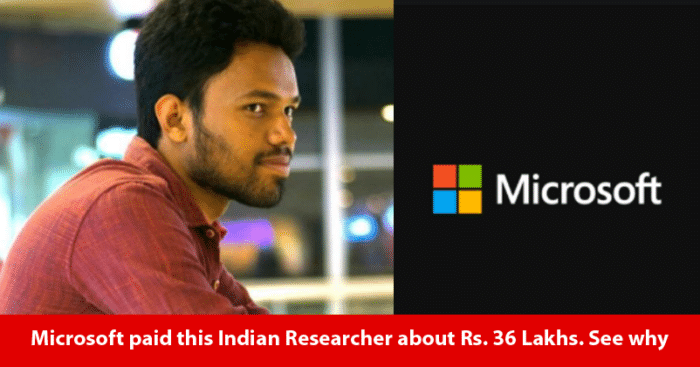 Recently, Microsoft arranged for a Bug Bounty program, in association with HackerOne. The recipient of the award, Laxman Muthiah, received $50,000 as the prize money for detecting a bug that could make anyone have control over any account on Microsoft. Sounds scary?

This was a vulnerability spotted by the Indian researcher. As per Microsoft, they had invited people to detect bugs and glitches that the company might have overlooked. Thanks to HackerOne, The Redmon-based giant, Muthiah got a lumpsum amount. The company is known for giving prize money worth $1000 to 1,000,000 to researchers who detect and report bugs.

Microsoft Account Takeover! 😊😇 Thank you very much @msftsecresponse for the bounty! 🙏🙏🙏
Write up – https://t.co/9ATsxAUfeB pic.twitter.com/pDEYv5f400

Muthiah thanked the company via an Instagram post. He detected the bug back in November 2020, and Microsoft was quick enough to respond to his revelation. It was earlier assigned to a different security impact that had to be clarified by him through back and forth emails. Finally, it was assigned to Elevation of Privilege who deemed this threat as important rather than critical.

Some users even asked how he did it and more info on the program to which Microsoft’s Security Response page replied instantly.

We manage our own bounty programs from Azure to Office and Xbox. check out https://t.co/7YJR0r9hCm for more details. We partner with @Hacker0x01 and @Bugcrowd to distribute bounty awards.

As per his Twitter, page, Muthiah is quite active in finding bugs and reporting them on various platforms. Thanks to his incessant curiosity, he was able to help a big company combat risky issues.

What do you think of this achievement?