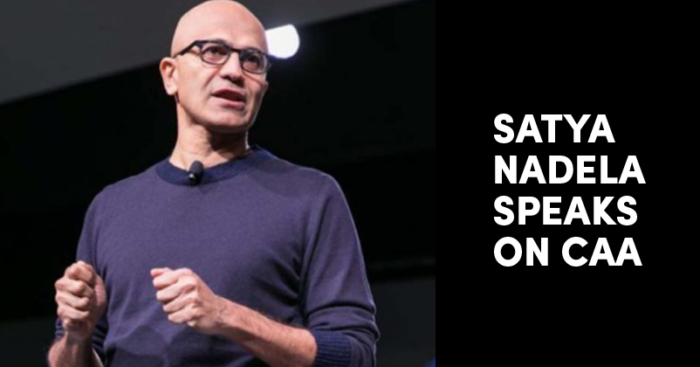 The Citizenship Amendment Act (CAA) has been the a topic of debate in the country ever since it was introduced as a bill by the central government.

With the growing outrage against the bill across the nation and the steps taken by the government also have divided the nation on opinion of whats right and whats wrong.

Along with many celebrities from the Indian film fraternity, the the news around CAA has garnered a lot of attention from influential people overseas.

While speaking at a tech conference in the US, Microsoft CEO Satya Nadella spoke on India’s controversial Citizenship Amendment Act (CAA).

He expressed his sadness over what’s happening in India currently with respect to CAA. However, he also maintained that India had a right to protect its borders and define its immigration policy, just like any other country.

Satya Nadella also expressed that he hopes that an immigrant is able become a CEO of a big Indian company someday, referring to his own journey to the helm of Microsoft.

The Microsoft CEO was quoted as feeling ‘sad’ and ‘bad’ for what’s happening in India currently by editor of BuzzFeed Ben Smith on his Twitter feed. He later posted a verbatim response detailing Satya Nadella’s views on India’s citizenship act.

(He was speaking to editors at a Microsoft event in Manhattan this morning.)

In the tweeted response, Satya Nadella is quoted as saying, “I would love to see a Bangladeshi immigrant who comes to India and creates the next unicorn in India, or becomes the CEO of Infosys, that should be the aspiration,” mirroring his own experience as an Indian who immigrated to the US, hoping that that’s what ends up happening in India in the future with respect to immigrants.

Microsoft India followed suit with an official corporate statement on behalf of Satya Nadella on Twitter.

The situation in the country are pretty tensed with respect to the CAA and all one can hope for is that everyone is able to find a common ground and that peace prevails at the end.