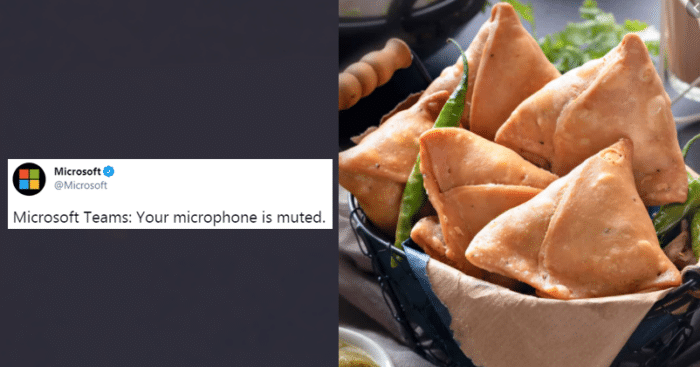 The year of the pandemic has bought with it many lifestyle changes. However, the biggest change it has bought with it is the way we all work. From teachers to corporate employees, all have been trying to get used to the new normal, Work from home.

Since the lockdown last year, many companies have opted to have the WFH culture considering the need for social distancing. While the whole idea has been new to many of us, it has become a challenge for some to keep things as professional as possible. We have all seen the streams of virtual meetings shared online where people forget to either turn off their mic or their cameras before doing their own thing.

This has bought with it many hilarious as well as awkward situations. A year after the lockdown, it seems that people are still trying to figure out the new normal.

Recently, Microsoft has also shared a hilarious incident when an employee was notified by the Microsoft Teams application that their microphone was on mute, the user responded that it was because they were munching on some overstuffed vegetable samosas.

Microsoft Teams: Your microphone is muted.

Microsoft did not take an offense to such an incident which any other employer might have taken. In fact, the tweet shared by the American tech company has gone viral since with more than 2k likes. People have been relating to this incidence on a personal level and have also replied with funnier responses.

I’m more like eating flaming hot Cheetos, drinking mtn dew, and not paying attention at all.

One Twitter user even gave an idea to make things easier for both the company and the employee. To which even Microsoft replied saying, “You might be onto something there.”

New feature idea: a button to turn your video off and replace it with a sign that says “I’m eating but listening”

The craving for the fried Indian snack was all over the post and people could not stop themselves from sharing it with everyone else.

I want samosas now. Thanks a lot, Microsoft! 😂🍴

Damn … Now even Microsoft is making me crave samosas!

Samosas 😋😋😋😋. When I’m in Sunnyvale, CA I always make a trip to Rajjot for their samosas.

What is the funniest incidence that has happened with you during one of your work calls online? Do share it with us in the comments section below.