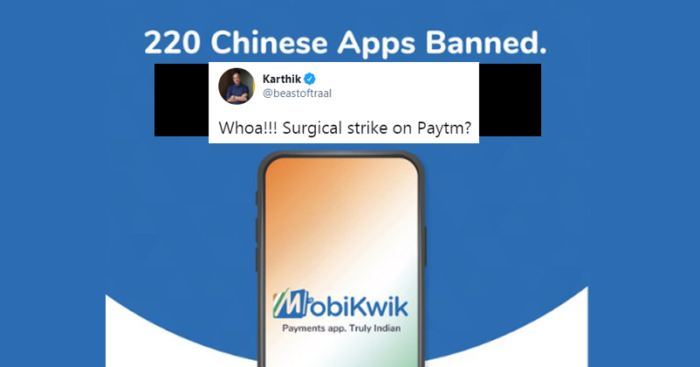 The Indian Government recently banned 220 Chinese apps in four different segments throughout the year. MobiKwik, a payments app, made headlines with a front-page ad on the Times of India, asking users whether they’re still making payments with the 221st app! Although they did not take any names, a number of people are questioning popular payments that are used by most on a regular basis. Did you check out this app in your morning paper today?

Just yesterday, the Ministry of Information and Electrical Technology banned 43 new Chinese backed apps in India. This was started ever since the #VocalforLocal movement took place, encouraging more and more people to try local goods and services. Major giants like Alibaba, Shein, PUBG, TikTok, UC Browser, and others were banned indefinitely, making them unsearchable and hence not available for download on the App Store and Google Playstore. If you have any of these apps still installed on your device, they won’t work any longer.

As MobiKwik hints at another ban, there is no confirmation on which application they are talking about. A number of users reacted to this ad as it definitely strikes a conversation. Check out these tweets.

The use code is the masterstroke!

While some users were awestruck with the creativeness behind the ad, one user pointed out how and where Indian companies lacked.

Not a good way to promote yourself. We need foreign investment as we are a capital starved nation. Rules and regulations can be applied on such investment.

Promote yourself ethically based on features, convenience and service you provide and not by such nationalist Ads.

Do you agree with this viewpoint? Which app do you think is probably going to be backed next, because of its Chinese funding?