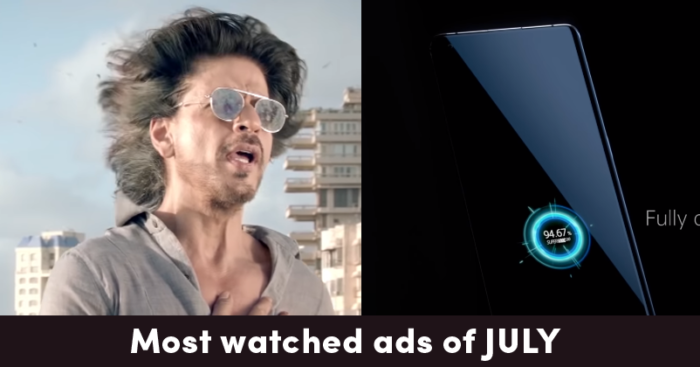 There have been a lot of commotion on Youtube in the past few months with various upcoming movie trailers and product launches. A video ad campaign has always been crucial in determining the success of the product.

Today we bring you the videos that received the most views on Youtube in the month of July 2020.

Hyundai India launched its new ad campaign starring Sharukh Khan which has been the most-watched ad on Youtube for the month of July. Hyundai has celebrated its 22 years of presence in the Indian market with the ad campaign. The ad campaign has received 90,643,373 views since its launch on 9 Jul 2020.

Morris Garages India has launched its latest smart car MG Hector Plus with a Smart Swipe. The all-new 6 seaters MG Hector Plus and its new Smart Swipe feature, open the tailgate in one swift, contactless motion. The ad has gained 61,908,506 views since its launch on 6th Jul’20.

‘He’s got the guts. She’s got the looks. Beyond that, they’ve got something that’s wilder than your imagination.’ Kia Motors India has launched an ad for its recently launched Kia Sonet. The ad has garnered 39,925,903 views since its launch on 20 Jul’20.

Vivo India has launched its new Vivo X50 series phone with breakthrough motion AF technology and Pro Sports Mode on Gimbal Stabilization. The ad has received 34,093,789 views since its launch on 18 Jul’20.

With this ad, Vivo India has advertised the Vivo X50 series’ new Xtreme dark mode feature for that perfect shot in night vision. The video had 33,690,355 views since its launch on 17 Jul 2020

The biopic of the Indian calculator Shakuntala Devi was made starring Vidya Balan and was released on Amazon Prime on 31 Jul’20. The trailer of the movie received a lot of appreciation and has been one of the most-watched videos on Youtube in the month of July with 33,810,262 views.