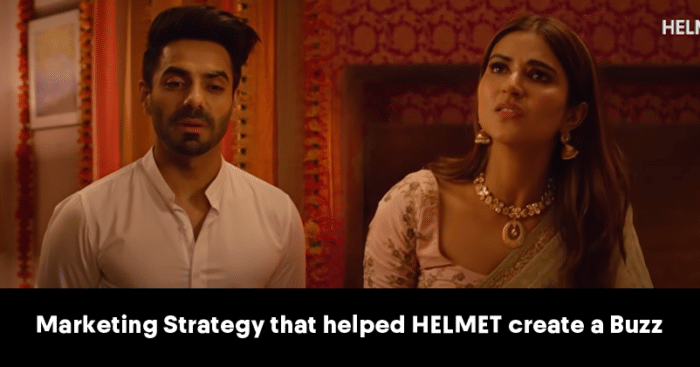 A quirky comedy revolving around an age-old taboo subject of buying condoms released on 3rd September 2021. Titled ‘Helmet’, and starring Aparshakti Khurana and Pranutan Behl in lead roles, the movie’s marketing strategy made all the right moves. Directed by Satram Ramani, the film has its lead ‘Lucky’ facing embarrassing and cliched challenges in a small town in buying condoms. However, the film was marketed in a number of ways.

Lets se the different methods adopted by the team of the movie.

A trailer teaser was made with a famous dialogue of the movie- “Toh kya chooran lagake karoge?”, inviting dialogue around the still taboo topic.

The teaser served its purpose, and a host of memes and dialogue pages cropped up generating conversations around the topic

The trailer was launched on 18th August that generated enough buzz to catch attention and 8.6million views on YouTube alone. More memes and conversations followed.

The creators started a slogan campaign encouraging people to create slogans that would capture the essence and bring out the message in the film, tagging ZEE5 with #HelmetSloganContest and #HelmetOn. The best ones would get to meet the star cast of the movie and win cool merchandise.

The cast interacted with over 500+ students and shared their first experience of buying condoms and encouraged discussions in an attempt to bust myths and social stigma around the subject.

Through this medium, using the word ‘Helmet’ as an anology, the movie saw a lot of celebs and influencers like Rajkumar Rao and Tony Kakkar creating funny short videos and sharing them on social media handles.

Sunny leone was roped in to spread the message on wearing helmets, whether on a bike or in a bedroom.

A series of 6-second ads was released to create buzz

Auto rickshaws were given a makeover with a helmet on the roof. A Zebra crossing contest too was released and people had to spot such an auto, and share an image, tagging the OTT platform.

Along with all of this, helmets were distributed to media personnel in support of their hardwork during the pandemic. These promotional activities undertaken by the Helmet Movie team, managed to create sufficient buzz around the movie.