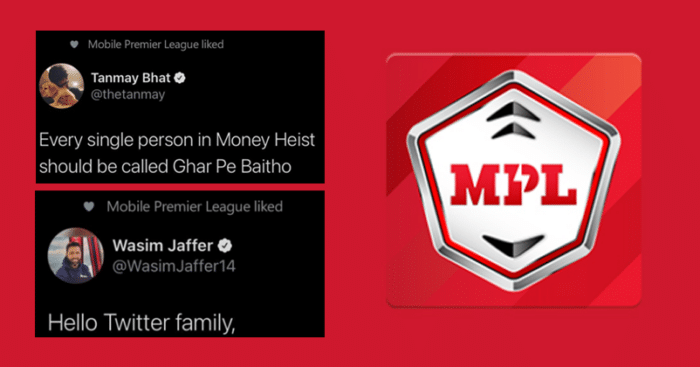 Mobile Premier League (MPL) is celebrating the IPL season to the fullest. The app is one of the principal sponsors for Shah Rukh Khan owned Kolkata Knight Riders has signed a three years deal with the team.

However, it may seem that the brand has gone a little extra with its excitement. From what we have seen in the app’s latest social media activity, the admin has been liking pretty old posts of celebrities on Twitter. Baffled by this, the celebrities have been tweeting and wondering what is going on.

Tanmay Bhat, a comedian, and co-founder of AIB had a hilarious reaction when he got the notification of MPL liking some of his very old tweets. The old tweets shared by the comedian were pretty hilarious too and an embarrassed Tanmay cheekily said ‘Tab main apni akal ka dushman tha.’

MPL did not leave the opportunity and replied the comedian in their own fun way.

If you read carefully you will see how MPL kept asking the celebrities to make their fantasy team on MPL with #HaiAkalKheloMPL. With the onset of the IPL 2021, MPL has launched their campaign ‘Hai Akal Khelo MPL’. As it turns out, the whole fun Twitter banter was to promote their app and their campaign during this IPL season.

Soon the threads went viral on Twitter and MPL was able to create a buzz with its tweets. People jumped in and even called it the ‘marketing ki ninja technique’.