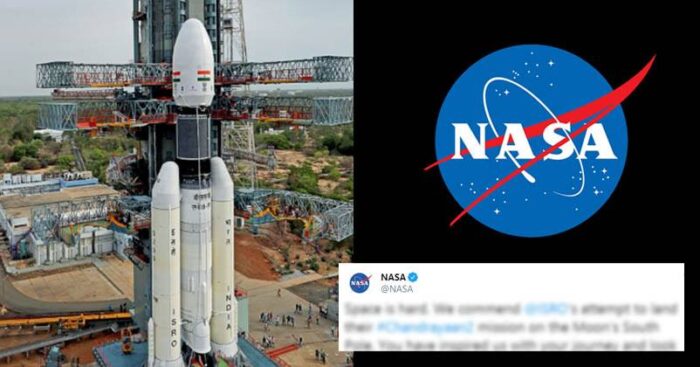 “It’s not the destination but the journey that counts!”

The Indian Space Research Organisation’s (ISRO) plan to soft-land Chandrayaan-2’s Vikram module on the uncharted South Pole may not have gone as per script on Saturday with the lander losing communication with ground stations during its final descent, it still managed to garner appreciation for its effort and hard work by space organisations across organisation across the world including NASA.

NASA lauded India’s historic Chandrayaan-2 mission on Twitter, saying the Indian Space Research Organisation’s attempt to soft-land Vikram module on the lunar South Pole has “inspired” them and that the US space agency is looking forward to explore the solar system with its Indian counterpart.

Space is hard. We commend @ISRO’s attempt to land their #Chandrayaan2 mission on the Moon’s South Pole. You have inspired us with your journey and look forward to future opportunities to explore our solar system together. https://t.co/pKzzo9FDLL

The #UAESpaceAgency assure their full support to the @isro following the loss of contact with their spacecraft, Chandrayaan-2 which had to land on the moon. #India proved to be a strategic player in the #space sector & a partner in its development & achievements pic.twitter.com/f3j14gsMqS

The #VikramLander was just a few kilometres short of realising its mission to the Moon today. To the team at @isro, we applaud your efforts and the commitment to continue our journey into space. https://t.co/jGhBaVhxAL

The team at ISRO is currently analyzing the available data and will attempt to re-establish a link for the next 14 days. However, as the orbiter is intact and circling the moon, the Chandrayaan-2 mission is still going on.

Let’s keep rooting for ISRO because space is indeed hard!

Also Read: NASA Replies To The Criticism On Its Sarcastic Tweet Congratulating ISRO