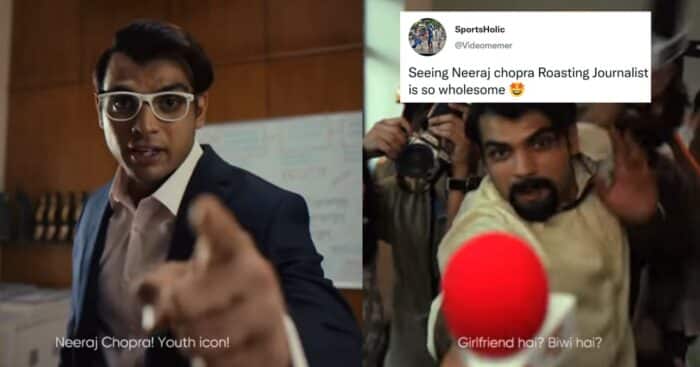 Neeraj Chopra has become a national sensation soon after his historic Gold medal win on the final day of the 2020 Tokyo Olympics. Since then, the 23-year-old has become a social media icon with everyone talking just about him.

According to a report by research consultancy firm YouGov SPORT, Neeraj Chopra recorded over 2.9 million mentions from over 1.4 million authors, making him the ‘most mentioned’ athlete globally on Instagram during the 2020 Tokyo Olympics.

Chopra has now become the new brand favorite and brands have started roping in the athlete too in their brand campaigns.

CRED, however, has aced the race to make the athlete the face of their brand with its latest ad campaign. The video features the country’s pride Neeraj Chopra in avatars never seen before. The ad was shared by the athlete himself on his Twitter handle and it is sure fun to watch.

In the video, Chopra displays the excitement India feels around him. He can be seen as a journalist, a producer, a marketing manager amongst many others. The energy he has displayed portraying the characters so perfectly is truly commendable.

As fun as the ad by CRED was to watch, the reactions Indians had on the video were even more entertaining. Seeing their loved athlete in something totally different has garnered a lot of attention on social media.

*Le Akshay Kumar, who was planning to do Neeraj’s biopic: pic.twitter.com/XW0NjWUhnN

Cred once again hits it out of the park. And Neeraj Chopra shows his good acting skills too along with portraying various wacky characters, wow! 🙌 pic.twitter.com/8izVx2mxAs

It took me a while to recognise it’s him playing multiple roles, amazing act Clapping hands signstar kids needs to take tutorial of both acting and humblesnees from Neeraj Chopra#NeerajChopra pic.twitter.com/p2wqddCBib

Even Virendra Sehwag could not stop himself from commenting on the sportsman’s acting skills.

Don’t know about Bollywood but the fans are eager to watch the athlete explore as many fields as possible. He is a true all-rounder after all.