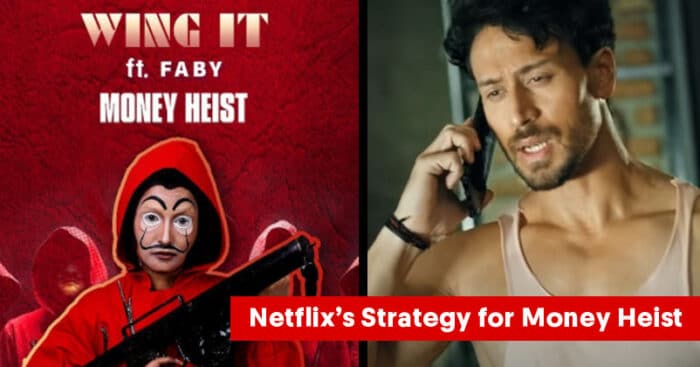 With Money Heist season 5 being launched, the series has become quite a rage and caught on amongst the Indian audience. Based in Spain, the series has been marketed to the Indian audience in a manner that attracts everyone and builds curiosity to a show which started in 2017. Right from promoting it through Indian celebrities to acing it at social media engagement, Netflix has definitely done an amazing job at creating a stir around the infamous heist.

Netflix announced the season release on May 24th, 2021 and later released a teaser video followed by the trailer.

The show is being released in India in multiple languages and an anthem by the name, ‘Jaldi Aao’ which resonated with the famous ‘Bella Ciao’ and featured the likes Anil Kapoor, Radhika Apte, Vikrant Massey, Shruti Hassan, Rana Daggubati amongst others was also released.

Social Media has been used quite optimally to attract the youth and a campaign starring Siddharth Kerkar and Larrisa DSA which attempted to recreate Rio and Tokyo’s look from the series was also released.

Other engaging social media posts were also rolled which had everyone commenting and interacting with Netflix, the excitement for the release being quite rife.

One very notable moment of marketing that also garnered a lot of attention on social media was when Jaipur-based agency, Verve Logic declared a holiday for its employees to watch Money Heist on the day of its launch.

Another significant appearance when it comes to marketing the tv series was the collaboration between Netflix and Pepsi which has Tiger Shroff starring in the ad film. The film has him on a mission to search for missing golden cans, that were released for commemorating season 5 of the show.

Netflix India has been able to penetrate the masses and reach out to audiences from niche segments through its marketing strategy. The series has been a hit since times infinity and the brand has been at the forefront of creating a stir amongst the audience, enough to have everyone waiting to watch the great big heist.