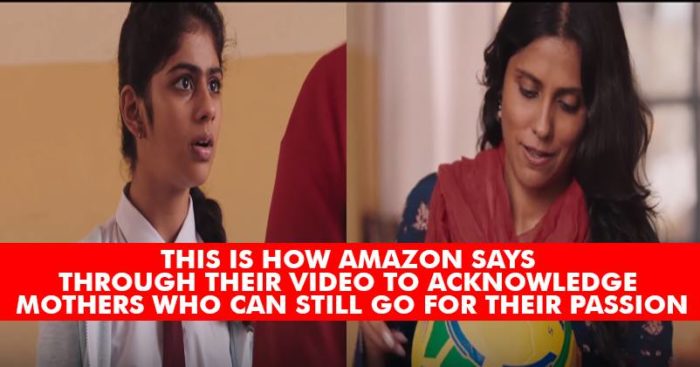 In the second half of last year Amazon.in came up with a campaign across the social media #MomBeAGirl. It became a huge hit and almost got 20 million views. This year also Amazon.in makes a comeback with this campaign in social media to grab the attention of viewers to some very sensitive topics.

The campaign was crafted from the learnings of the social campaign #WhenAWomanShops. It threw light on the fact ‘we think women love to shop. But they shop to love.’ Basically, women, many times sacrifices her hobbies and dreams for her family. She is not bound to do that. So it was to bring back the old memories and dreams of our mothers and let them follow again.

The campaign consists of two videos that showcase the people who remember dreams and aspirations of their mother during their younger days and acknowledge them.

The video opens up showing the retirement party of a 50-year-old woman. But things take a surprise turn when in a farewell party organised by her family, her close friend comes to meet her. She gifts her a guitar. The woman gets elated to receive something that was her hobby long back. The party also was named ‘Welcome Back Gudiya’. The video ends with a message ‘When Did You Stop Being A Gudiya?’.

It actually tries to enlighten the fact that there’s no age bar to aspire one’s passion.

This is about a 35-year-old mother who visits back her childhood days and again lives her dream by playing football. The video opens with a school coach who introduces the daughter of her ex-student with the achievements of her mother which she was totally unaware of. When her mother revisits her during her birthday the girl gifts her with a football and they are seen to enjoy their time playing on the field.

The video basically showcases how each and every mother once had a dream and was something good at but things have turned otherwise. But nothing is late enough as one can still go out and achieve their passions and dreams.

“Along the journey of life, there are many seemingly small sacrifices that the woman makes. For some it’s career, for some its motherhood and for some, it’s the many responsibilities that life brings as we grow older. Often it means giving up a passion or interest. ‘I don’t have time for a hobby. I am a mom!’ said many of the women we met. Giving up a passion or interest may not seem like a big sacrifice. But it’s not just an interest they give up. They give up something they love to do, a way to relax, recharge and connect with self. They give up a part of themselves. Often, there’s limited acknowledgement. This insight led us to our big idea. Or rather some big questions. Is there a way women have to make fewer sacrifices, not give up the things that bring them joy? Shouldn’t we, their loved ones, acknowledge their sacrifices, thank them? With #MomBeAGirlAgain we aim to connect with people on an emotional level and encourage them to help the women in their lives, and their mothers rediscover the joys of their childhood.”

“This is not just a campaign. It’s a movement or a clarion call to mothers to welcome their passions and go back to being their little self, to again become the ‘Tuffani, Gudia, Golu’ they were. It’s an appeal to their families to encourage mothers to embrace their pet names and their little girl selves. And it’s not just film. In keeping with the What’s Your Problem approach, we’re reaching out to women through whichever medium relevant, be it radio, digital activation, social media, influencer programmes, YouTube mastheads, etc.”