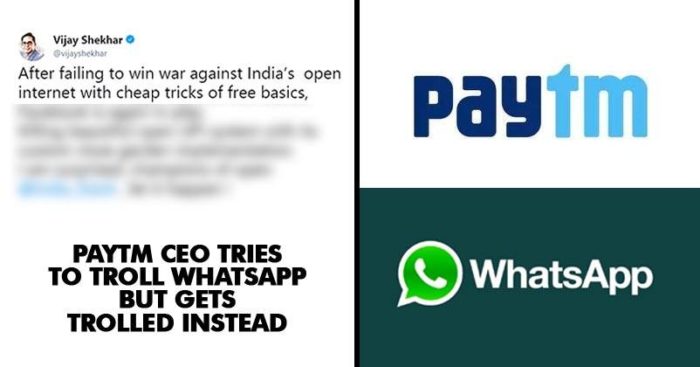 WhatsApp’s payments feature has already started scaring big entrepreneurs in India. Companies are seeing this feature as a big blow to the Indian digital wallet market. The latest one to show concerns is Paytm’s founder- Vijay Shekhar Sharma.
Sharma seems very scared by Whatsapp and he is saying that Facebook wants to kill the open UPI system in India and wants to rule everything all alone. Here is what he wrote on Twitter:

After failing to win war against India’s open internet with cheap tricks of free basics, Facebook is again in play.
Killing beautiful open UPI system with its custom close garden implementation.
I am surprised, champions of open @India_Stack , let it happen ! https://t.co/wIsNuF1AiB

Insted of getting support from fellow entrpreneurs he got trolled by them. Bibin Singh was the first to do so as he tweeted:

Those complaining abt Whatsapp are the same folks who refuse to entertain neutral payment options(like @MobiKwik )on their own ecom websites/apps and instead promote only captive wallets. A standard of interoperability should incl wallet acceptance as well 2/n

FreeCharge founder Kunal Shah joined Bibin but he didn’t use the name of Paytm clearly but we all can guess what he wants to convey by reading his tweet:

All companies threatened by Whatsapp payments are going to tag it as anti national and try to pull it down as it’s hard to win on merit against network effects of Whatsapp.

This strategy worked for Patanjali and wonder if it will work for payment companies.

The topic was already getting intersting and then PayU CEO Amrish Rao expressed his views. He said “It’s good to see that Chinese companies are standing up against the anti India Whatsapp !”

It’s good to see that Chinese companies are standing up against the anti India Whatsapp !

He also wrote that WhatApp and UPI are getting targeted in his another tweet.

Let’s get this clear, Whatsapp and UPI being targeted. Just reminds that even $ Billions are scared of great UX.

After reading all these tweets it is clear that the fellow entrepreneurs didn’t like what Vijay Shekhar Sharma said about WhatsApp payment’s option.