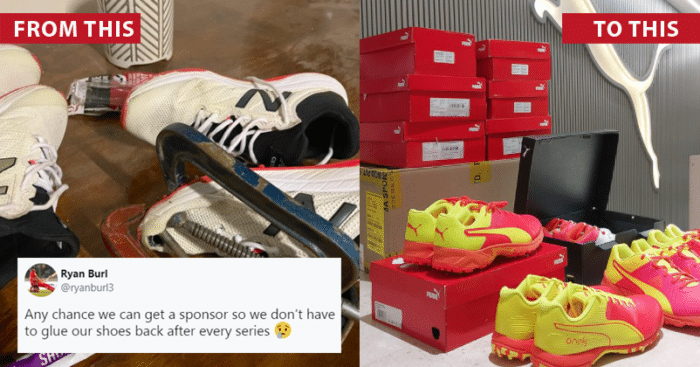 Zimbabwe cricketer Ryan Burl recently took to his Twitter to ask someone to sponsor his team with shoes so that they didn’t have to glue them back on every season. The gameplay can get very rough on the field, and like Ryan, other cricketers sometimes have to mend their worn-out shoes due to their small capacity and limited recognition. In a response to his plea, Puma swooped in as the life-saver. How?

This is what Ryan Burl initially posted.

Any chance we can get a sponsor so we don’t have to glue our shoes back after every series 😢 @newbalance @NewBalance_SA @NBCricket @ICAssociation pic.twitter.com/HH1hxzPC0m

Every team from the BCCI isn’t backed by sponsors for their apparel, shoes, and gear. Luckily for Burl, Puma granted his wishes in another tweet.

I can’t wait to join the @pumacricket team! Thanks so much for reaching out 🤗 https://t.co/AJEPH6zONn

The brand took the effort to match the color of the shoes to their team’s jersey. Additionally, they also sent out the new shoes for all the team members via express shipping! Puma has definitely won hearts and Ryan took to Twitter to thank all his fans who had shared his tweet and helped him reach out to the official brand within 24 hours.

Express shipment for @ryanburl3 and his mates. I hope the colours match the jersey. 😉 pic.twitter.com/Df8jxVQ8B3

Ryan and his team are officially part of the Puma cricket team! The brand signed a deal with Burl despite him having only 3 test matches and 17 ODIs under his name.

I am so proud to announce that I’ll be joining the @pumacricket team. This is all due to the help and support from the fans over the last 24 hours. I couldn’t be more grateful to you all. Thanks so much @PUMA

Fans are appreciating everything the brand has done so far. They are surely giving aspiring cricket teams the hope to make it big. Here’s how some of them reacted.

So happy for you 👏👏 real quick

What do you think of Puma’s heartwarming gesture?