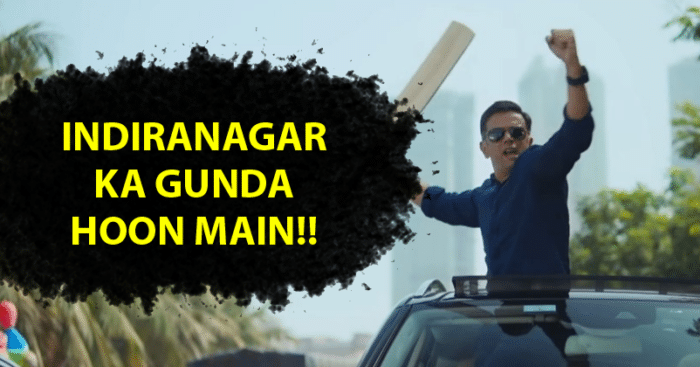 Rahul Dravid is known as one of the many gems in the Indian Cricket Fraternity. Apart from his spectacular career in cricket, Rahul has always been termed as one of the coolest cricketers ever to be. His calm and poise have always had his fans in awe of him.

But recently, we all have got to receive an entirely different side of Rahul Dravid. In an advertisement for CRED, Rahul was shown as a very angry and aggressive man while he is stuck in traffic. He can be seen picking fights with strangers, breaking the side view mirrors of other cars with a bat, and being annoyed with people around him in general.

This fun ad was shared by the Indian Cricket Team Captain Virat Kohli on his Twitter handle with the caption ‘Never seen this side of Rahul Bhai.’

Never seen this side of Rahul bhai 🤯🤣 pic.twitter.com/4W93p0Gk7m

Tanmay Bhat along with Devaiah Bopanna, Puneet Chadha, Nupur Pai, Vishal Dayama is the brains behind this genius ad campaign and it is executed by DDB Mudra and 22Feet Tribal Worldwide. Tanmay had also shared Virat Kohli’s post asking if we want ‘a behind the scenes vlog of this’.

Rahul Dravid is one of the nicest, politest people I’ve had the pleasure of meeting. In the brief few hours, he taught me how to correct my batting stance (I do all my cardio while batting in the nets), was kind enough to share the most fascinating cricketing insights –

He further went on to share a heartfelt note for Rahul Dravid and had said a lot of kind words for him. Rahul even taught Tanmay to correct his batting stance.

Since the video has been posted it has received a lot of positive reactions from people. Rahul’s new avatar and his punch line ‘Indiranagar Ka Gunda Hu Main’ has since gone viral and people cannot stop talking about it. Many brands have also jumped in on all the fun and posted some of the best tweets on the ad.

Zomato, for one, informed people that the delivery in Indiranagar might be late today due to an ‘angry Gunda on the road’.

Reports coming in from Indiranagar that a Gunda is breaking cars, if this Gunda has damaged your car too, we are offering free upgrades.

The last time Rahul Dravid shouted like this was, from the Karnataka dressing room, and I was at the receiving end. “Innu ondu Run ide kano”. @imVkohli https://t.co/8QE1roe926

Twelfth Man Official, a football gaming app, has also posted a take on the ad in their own way.

Cars24 offered a free upgrade to anyone whose car got damaged by this ‘Gunda’ in Indiranagar.

Reports coming in from Indiranagar that a Gunda is breaking cars, if this Gunda has damaged your car too, we are offering free upgrades.

Some actors are walls. Some walls are actors. #RahulDravid

Bajaj Allianz was concerned if people had their cars insured to save them from the angry man on the streets.

There is an angry man on the streets. Hope your car is insured.😅#CaringlyYours #RahulDravid

Parle-G will be doing their best to make Rahul less of a ‘Gunda’ and more of a ‘Genius’.

Sending additional supplies of Parle-G to Indiranagar to turn the Gunda back into a Genius.#IndiranagarKaGunda #GmaneGenius #RahulDravid

Screenwriter Aniruddha Guha complimented CRED for creating yet another great content with celebrities. Yet he is still unsure as to why we need the product in the first place.

This new CRED ad featuring #RahulDravid once again shows the brand knows how to create great content with celebrities, while still not telling us why the hell we must use the product. pic.twitter.com/kk1h89iC7W

Rajasthan Royals shared a meme on his ‘performance’ in Indiranagar along with a few others.

Some of Dravid’s best performances 🙌 pic.twitter.com/fDN9a2juVs

To all of you wondering what is so special about Indiranagar, let us tell you that Indiranagar is a locality in Bengaluru and Dravid has spent a majority of his life there in his family home.