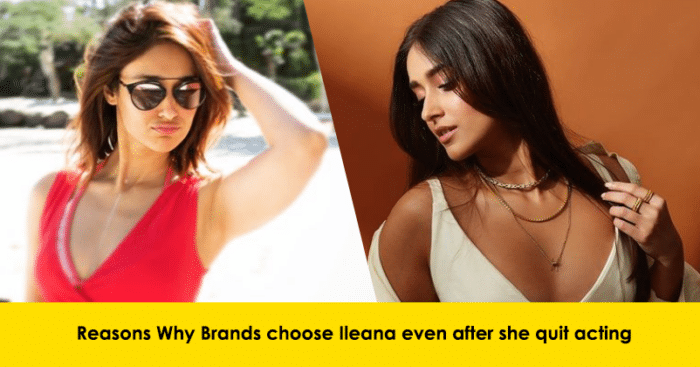 The very talented and gorgeous Indian superstar Ileana D’Cruz is one of the most buzzing figures when it comes to brands and endorsements. She has been a fabulous actor not only in the South Indian film industry but also in Bollywood. Let’s have a look on some of the most relevant reasons for the brands to pick her for endorsements:

Starting from playing the role of a calm and composed lady in Barfi to a ‘dhamakedaar’ entry in Main Tera Hero, Ileana D’Cruz has explored a wide variety of roles via the choice of her films which makes her a versatile actor as well as brands to choose her for endorsements.

Apart from acting Ileana D’Cruz is into modelling, she has made a remarkable position in the fashion industry as well. She is a role model when it comes to fashion and modelling. Her fans definitely look up to her for fashion tips and enthusiasm. The way she carries herself in a bold and outgoing manner is what makes her stand out from the crowd and yet another big reason for the brands to pick her for endorsements.

Confidence is her key

The way she carries herself with absolute grace and ease is what makes her a a showstopper in every aspect of her life. Full of body positivity and radiating good vibes Ileana has her personality completely sorted. A strong, independent and focused woman is what defines her and adds up being another reason for the brands to pick her for endorsements.

Every self-made person has a struggle story of their own and Ileana is no exception in this case. She had her own struggles while opting for a career in the e film and modelling industry and to create a remarkable and significant position. It is the result of years of struggle and hard work after which Ileana has now set a benchmark in the film and modelling industry. This is yet one of the many reasons for the brands to look up to her for endorsements.

Ileana D’Cruz is indeed a role model and a source of inspiration for many. Many of her fans as well as brands look up to her in many aspects. Hence, here were some of the greatest reasons for the brands to pick her for endorsements.