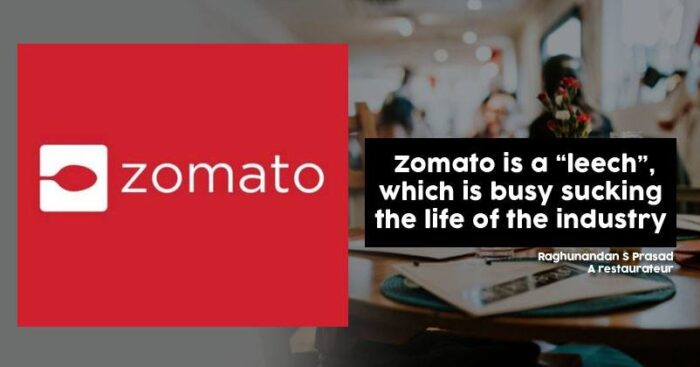 Zomato is certainly the saviour from the daily mundane food, for many of us. But, after the #logout movement, things seem to be going downhill for Zomato.

In an open letter to Zomato, a restaurateur, Raghunandan S Prasad, clearly reveals the unfair and unruly behaviour which Zomato holds in front of its delivery partners. People from all over India has responded with similar rage. So why are they against it? What is the truth behind Zomato?

Let us go through the points covered in the letter by Raghunandan which depicts that Zomato is at fault.

1. Zomato involves customers when it comes to feedback and performance improvements. Raghunandan clears that this is largely an internal matter and they had their own mechanisms to get the customer feedback and hence, Zomato has no right to display the matter with so much scrutiny and bias to public eyes.

2. Zomato changed their rating system and in an explanation gave a vague response mentioning a percentile grade system with “complex algorithms” that were too detailed to be explained to low profiled restaurateurs. And because of this explanation, Raghunendra’s rating fell by 3 points and legendary places around him went up a few notches.

3. Raghunandan complains how Zomato takes away all the credit for their product which they so laboriously sell to their actual customers.

4. Zomato tightened the rules of the delivery platform imposing huge penalties on customers/restaurants if they didn’t obey its rules. And Zomato reasoned this step in the name of serving their customers.

5. Zomato threatened them by ensuring legal action against them for opposing the regulations. Raghunandan alleges Zomato of creating this whole price war and mess.

6. Zomato has to be payed ₹45,000 for gold subscription and promises a very exclusive service and choice of few customers and restaurants in the program.

Take a look at the open letter:

7. Raghunandan claims Zomato to be a “leech”, which is busy sucking the life of the industry.

8. Raghunandan claims how all restaurateurs from all over India are mad at Zomato and still it has the audacity to blame them for being inconsiderate to their customers.

9. Also, Zomato leaves its delivery boys under the bus when they ask for their basic rights.

10. Raghunandan roasts Zomato by claiming that they themselves have grown into a whole community and fed the people with love and not discounts. He warns that Zomato’s discount addiction schemes and promise of profits won’t last.

11. Zomato has made no profit yet and thus it cannot be seriously taken.

12. Zomato is all about two things according to Raghunandan, data and borrowed money. Zomato forces the restaurateurs to accept its terms because deep pockets and knowledge are powerful.

These were the problems faced by not only one restaurateur but many. Thousands of people had uninstalled its app and rated with one-star ratings over a Twitter post, it’s delivery partners in Howrah had protested over being made to deliver beef and pork, and more than 1,200 restaurants logged out of Zomato Gold.

After this reality check, let’s hope Zomato looks into the matter soon and takes strict action for the betterment or otherwise, the day is not far when the loyal pack of customers will also turn away!