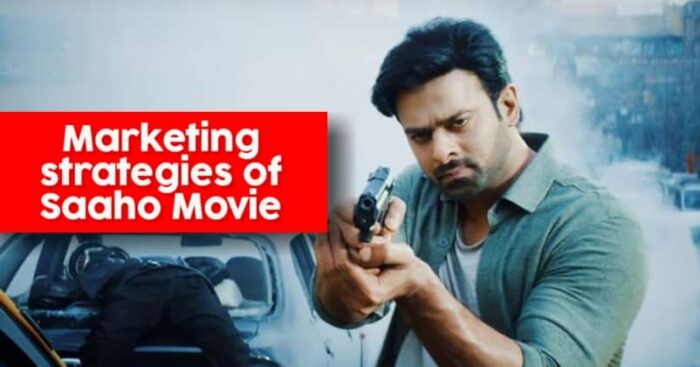 Saaho, starring the Bahubali fame & south’s superstar Prabhas was released on 30th August’19. The film garnered a lot of attention way before its release all thanks to its PR team. From starting the #ShadesOfSaaho to Saaho emojis, Saaho the Game to #TeamSaaho going viral, the PR team left no stone unturned.

With Prabhas leading the pack and Shraddha Kapoor playing the leading lady, the film was full of twists and nerve-wracking turns. It was clear from the beginning that the action-thriller is on the road to win over the silver- screen.

As much as the movie content, direction, and the star cast play an important role in guaranteeing the success of any movie, the correct marketing strategy is equally crucial.

And Saaho‘s PR team took over the best strategy from the book. They created the buzz slowly and gradually ultimately craving the audience for more.

Saaho was also termed as Prabhas‘s debut in Hindi movies. And after his success in the mega movie Bahubali, he had fans waiting for the release all over the country.

Touted to be the year’s largest action-thriller, Saaho, set the social media world on fire especially when it garnered a record of more than 5 million tweets prior to even the theatrical release of the film.

This included some prominent hashtags such as #Saaho, #WorldSaahoDay, #SaahoInCinemas, to name a few.

#SaahoInCinemas now! Watch it at your nearest theaters and experience the action!

HERO!! 💥 Being a huge fan of #Baahubali, you can imagine how excited I was to work with #Prabhas 😃 when I got the call from @sujeethsign asking me to join #Saaho, there was only one answer: YES!!! 💯🔥😁 #saahocountdown #tollywood #bollywood pic.twitter.com/SSsqtZUtdq

Just saw #sahoo trailer and what a smash it is! Can't wait to see #prabhas & @ShraddhaKapoor with @UV_Creations hit it out of the park. Super pumped to see the film. All the best to entire cast and crew pic.twitter.com/D9fRbGTkSW

The #ShadesOfSaaho captured the behind-the-screen footage of the making of the mega movie. Whereas Shades of Saaho 2, took a step further and gave a glimpse of scenes from the movie with the introduction of the bold and beautiful, Shraddha Kapoor.

The teaser for the trailer did the trick and left us craving for more.

And after building-up, the desired buzz, Saaho‘s PR team took the opportunity to finally release the trailer which was nothing short of what we had expected. It was a full action-packed thriller we were promised.

The movie finally released and received mixed reviews. Nevertheless, Saaho‘s marketing team has set a very good example of how it should be done. Mixed reviews or not, everyone is excited to see the movie on the big screen.