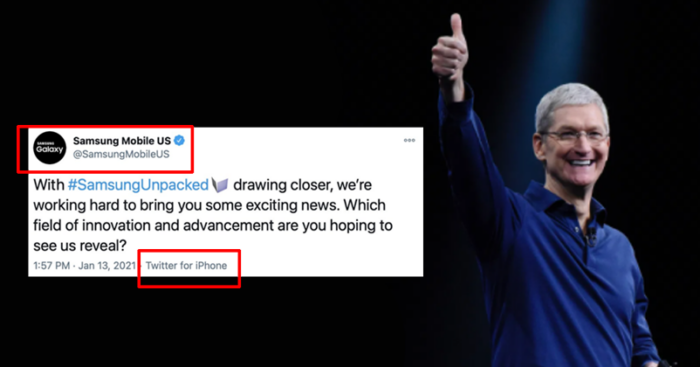 To err is to human. And in some cases, the ‘err’ is too much and too hilarious for the world to see. Samsung came out with its #Unpacked series featuring some new phones for its excited fanbase. In a tweet mentioning the same, we guess their social media team wasn’t too thrilled about Samsung’s features. The tweet could be seen being posted from an iPhone, and everyone knows what a big competition the two brands have against each other.

Of course, netizens were quick to notice this mistake trolling the brand heavily. So the question is – if even Samsung employees don’t use the Samsung smartphones, why should we?

Here are some of the hilarious responses to this goof-up.

Why Samsung, whyyy😂😂😂😂 of all the things you could do today, this? Ah! Someone's gonna get fired today 😂😂😂😂

Why won’t you bring memes into this? Duhhh.

Who made this😂😂
Cute hai 😜😂❤️ pic.twitter.com/tooLnYh4ey

When you hate her but you can’t live without her 😆

We’re not really sure whether this was a marketing tactic gone wrong or they secretly support Apple. But all in all, this will impact a lot of users to ditch the brand and go for something better.

Well if you’ve been using Samsung phones for a long, we don’t think you’d make the switch. Choose your brand wisely and check out the new features from the Samsung phones to take your pick.