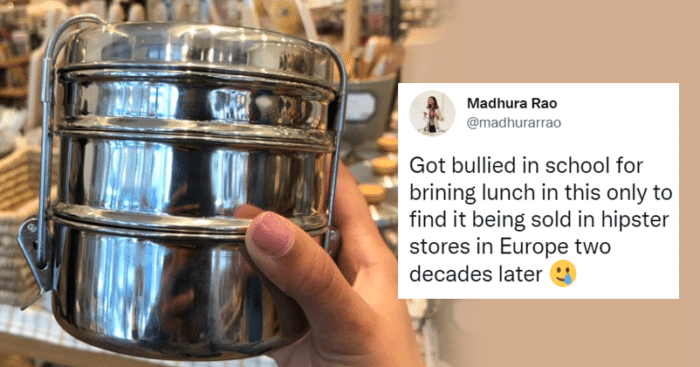 Remember when back in the school days we used to carry our own steel dabbas/lunch boxes and sharing lunch with friends was a fun affair. Yes, though it was fun yet with the progressing times it became an object of bully among the students, some of the so called cool students who shifted from steel lunch boxes to fashionable plastic ones back in those days were the ones who were most into bullying others when it comes to students carrying lunch in the steel dabbas.
Years later, almost after two decades we find out how these steel dabbas are being sold at ‘hipster’ stores in foreign countries and we can’t help but remember those golden school days. Let us have a look on how the desi Twitter reacted to this instance:

Got bullied in school for brining lunch in this only to find it being sold in hipster stores in Europe two decades later 🥲 pic.twitter.com/2MPEhJk2gC

Even now I’m bringing own lunch to work. Now using thermal tiffin so my food warm when lunch time. Nothing to be ashamed pic.twitter.com/EVkcJOjDRp

The one you are holding is definitely an import from India though 😁 I took one tiffin from India back to Germany for my mom too, because for her it’s very nostalgic and otherwise you don’t get it anymore… unless you want to pay hipster shop prices for it 🙈

Though some of the Twitter fam related and traced back to the times they were bullied in school for bringing this steel dabbas, there were many others who relished and relived those fond memories of the school days related to these steel dabbas/ lunch boxes.