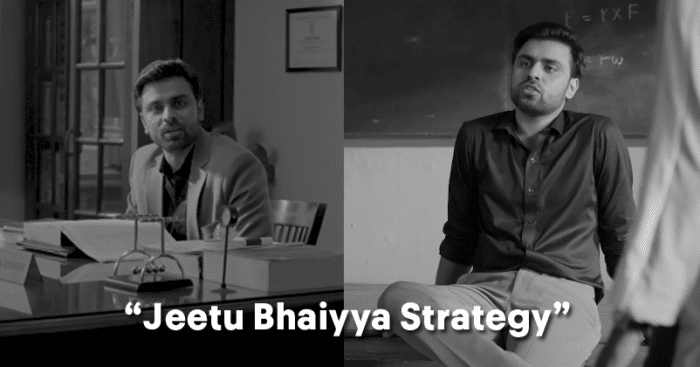 Kota Factory 2 has been one of the most awaited shows on Netflix India. With characters and their conversations that feel like real life situations being played on reel, the show managed to garner a loyal and massive fanbase. And the standout character ‘Jeetu Bhaiya’, played by Jitendra Kumar has become an iconic and unforgettable character to ever be portrayed.

The marketing campaign designed by Netflix india in partnership with The Rabbit Hole Agency. They undertook a 360-degree marketing campaign to launch the second season of Kota Factory. A lot many promotional activities were designed keeping in mind Jeetu Bhaiya’s character, who is a mentor, a teacher and when needed even a friend to his students.

The show’s team collaborated with real-life engineers turned influencers, who were asked to share life lessons, which they learnt out of syllabus that helped them become what they are today. Popular influencers like Mythpat, Rahul Dua and Tanzeel Khan were roped in who shared black and white selfies on Engineer’s Day, keeping up with the Kota Factory theme.

For the first time in history, the show was advertised during the IPL, with lead characters drawing parallels between IPL and IIT entrance exams.

Jeetu Bhaiya is known to have answers to life questions that otherwise seem unanswerable. And using this trait of his, through a novel way, Netflix raised interest by asking Twitter users to post an answer to their one question – If you had a chance to ask Jeetu Bhaiya for advice, what would you ask?. This had various influencers like Aishwarya Mohanraj and Srishti Shukla posting their funny questions with #OP on the social media platform.

Hey Jeetu bhaiya, how do I convince shopkeeper to give me change instead of toffee ? #JeetuBhaiyaOP https://t.co/gttAecpvtm

Jeetu Bhaiya, how do I stop myself from going into the kitchen raat ko? #JeetuBhaiyaOP https://t.co/FZ3rbnEb8I

A video highlighting Jeetu Bhaiya’s trait of using out-of the box teaching methods and incorporating real-life experiences in making learning easy, was uploaded on YouTube. This video garnered 2.47 million views in one day.

On the day of release, a satirical video titled “every coaching class ever” was released. This video showed the tricks played by
coaching classes on parents except Jeetu bhaiya’s coaching class of course. The video was viewed 2.6 million times.

Also, a light hearted dig was taken at the practice of various coaching classes, exhibiting their students ranks in entrance exams, on newspaper front pages. The same was done here, but exhibiting the number of lessons learnt by each student and not their ranks. 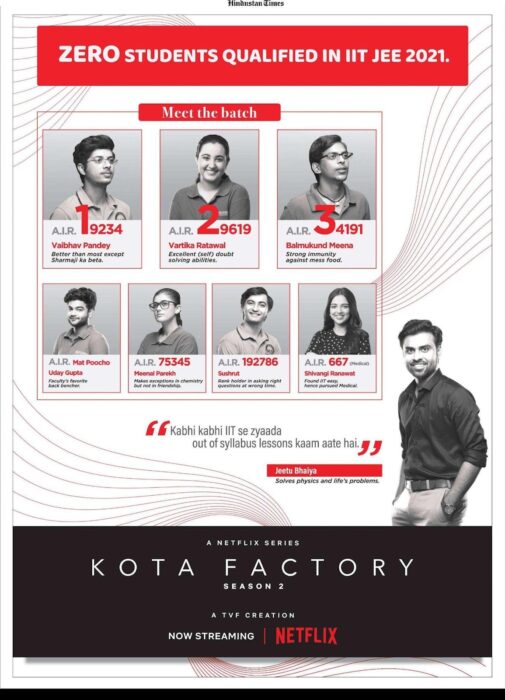 A video featuring Mayur More, Ranjan Raj and Ahsaas Channa titled #CharmBattle was released after the show’s release. The video had Mayur and Ranjan trying to impress Ahasaa with quirky pick-up lines. It garnered more than 1.54 million views.

The team also joined forces with Scoppwhoop’s OkTested to taste 5-6 dishes and find out whether they were made in a mess or was a Maa ke haath ka khana, as mess food is magnanimously detested and mom’s food is celebrated worldwide.

The marketing strategy for Kota Factory Season 2 was a comprehensive one and ensured maximum audience engagement.