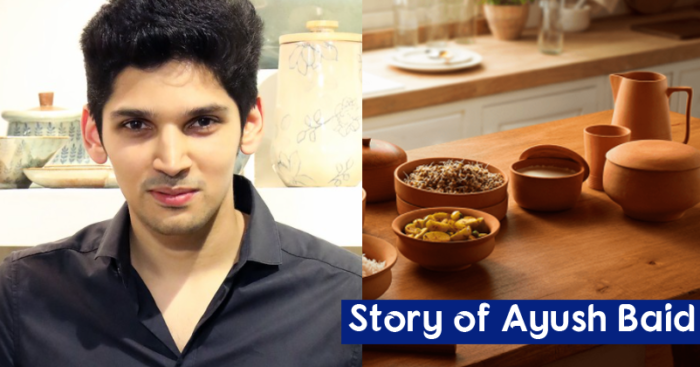 Ayush Baid hails from Jaipur and always had a keen interest in the handicrafts business. Since he grew up watching his father run a handicrafts export business, Ayush was always inclined towards it.

Since a young age, Ayush witnessed the Indan art & culture up close thanks to his father. Dileep Baid, Ayush’s father, has been running a successful business of over Rs 175 crores turnover. This motivated Ayush more to pursue the field of handicrafts.

Ellementry: How It All Began

In 2018, Ayush started a lifestyle brand by the name of ‘Ellementry’ that sells handicraft products online.

Having done his graduation degree from University College London (UCL), Ayush had started helping his father with his business early. That is when he realized that even though the scope of handicrafts product was huge, there was an untapped market for handmade kitchenware.

He started focusing on the demand for marble-glass and terracotta-wood kitchenware and even contacted local artisans to manufacture the items in-house.

Apart from making the products available in the international market, Ayush wanted his goods to be available in the domestic market as well. He wanted Indians to have access to the heritage that handmade crafts have.

The Plan Of Action

Ayush decided to do a thorough analysis of the market and also the necessary groundwork without further delay. He contacted the local artisans and tried to analyze the demand these products have. Then he came up with the idea to retail his father’s handicraft products through an e-commerce website.

Once the plan to start the business was fixed, all Ayush needed was substantial funds since the business was huge. Ayush pitched the idea to Bennett, Coleman, and Company Limited (BCCL). After listening to his well put pitch, BCCL liked the concept and invested Rs 250 crore as a Brand Capital deal. The remaining capital was invested by his family. As per Ayush, Ellementry is one of the first Indian handicraft brands to establish a direct, manufacturer-to-consumer relationship which means that it does not have middlemen. The role of a middleman has always been very common for the Indian handicrafts industry.

Since the commencement of the firm as an eCommerce brand, it has received a lot of positive response from the market in the very first year. In 2019-20, Ellementry recorded Rs 12 crore in sales. This encouraged Ayush to open eight physical stores and expand its reach in Delhi, Jaipur, Mumbai, Bengaluru, and Hyderabad.

The COVID19 and the lockdown induced due to it hardly affected Ellementry’s business. In fact, Ayush says that the company saw a rise in demand for attractive kitchenware as people were spending more time at home. In 2020 so far the company has earned Rs 6.5 crores.

Seeing the success of the brand, Ayush has decided to open up franchise stores in Lucknow, Cochin, Gurugram, and Bengaluru.