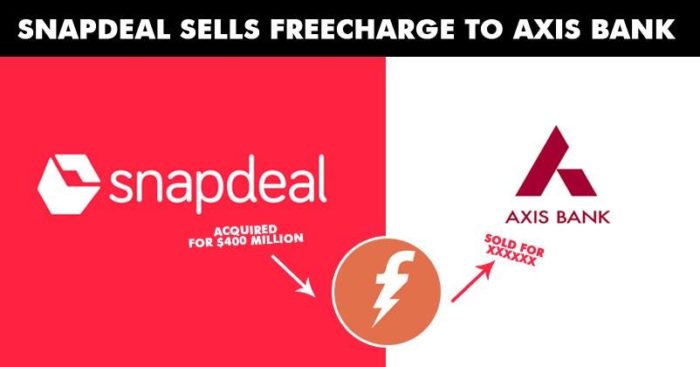 FreeCharge was found back in 2010 and five years later it was sold to Snapdeal with a whopping amount of $400 million. In 2015 FreeCharge was one of the largest startups in India when it was bought by Snapdeal.

In the span of just two years, it’s managed to shed 85% of its market value.

According to reports, Snapdeal sold its payment subsidiary FreeCharge to Axis Bank for about $60 million in an all cash deal. With Snapdeal itself facing woes in their business rumors are around the corner that they would themselves sell their online marketplace to rivals Flipkart. In February, it had faced a huge cash loss and fired 500 employees, and withheld the salaries of its founders too. This effect fell on FreeCharge too as Freecharge raised funds from its parent collaboration Snapdeal a few months before.

Another big leap towards the vision of a digital economy??! Looking forward to a great run with @AxisBank. ? https://t.co/dTNevooj8T

FreeCharge were looking forward to raising funds in last few years and has been in talks with Foxconn, financial technology companies Paypal and Paytm at different points of time for financial sales and investment or a deal of about $1 billion. But due to falling in the market of FreeCharge and profits of Paytm it led to no solution.

“27 months ago, the team at FreeCharge was neck to neck with a top player and had the choice of going solo with 95M dollars we had in the bank or merge with a larger company to have step function growth. We chose to merge. Most internet exits in India have been due to distress or common investors wanting to cut losses and merge their portfolio companies, but we had none of that situation and we chose this path to become bigger.”

“The big takeaway from the Snapdeal-Freecharge situation is the fact that the consumer internet market is growing very slowly. This is not China. Just because everyone has internet access does not mean the internet economy is growing. And that’s not going to change in the next few years—the GDP (gross domestic product) is not suddenly going to grow at 10-12%. What we have seen so far is too much exuberance and optimism from investors and that’s not going to help. When that happens, you end up with a situation like (Snapdeal and Freecharge).”

By robbing in FreeCharge Axis Bank gets a well-known brand for digital payments and thus bring technology to its user’s fingertip. Paytm is the market leader at the moment with over 230 million users and is also a digital payment medium for many banks. Though FreeCharge is first of its kind and has a brand name still it would be tough to compete in the market at the moment with its rivals.

Hope this new collaboration brings new horizons for both the companies!