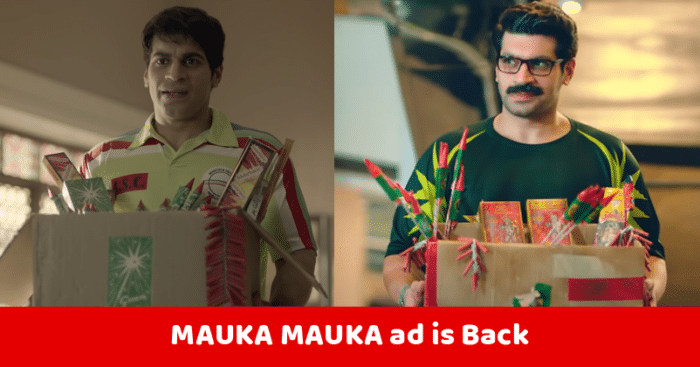 The words “Mauka Mauka” are synonymous with cricket matches between India and Pakistan, thanks to the advertisements that were launched on television in 2015. The campaign was initiated by Star Sports to promote the Cricket World Cup. And though initially it started of with just one ad, its exponential popularity and catchy tagline, prompted the channel to make a few more advertisements on the same lines.

And now in 2021, just when India will meet Pakistan on the cricket field after a long hiatus, on October 24th in U.A.E and Oman, Star Sports has once again brought the commercial with the same actor and tagline, but with a funny premise.
This minute-long ad, has a man wearing the famed Pakistani jersey entering his friend’s electronic showroom, holding a box of firecrackers meant to be lit, when Pakistan wins and beats India. He is suggested by his friend to buy two television sets by his Indian supporter friend, so that he can break one when his team loses to India, as India has never been defeated by Pakistan in a world Cup cricket match. He is then shown breaking a television set in 2012 after India defeated Pakistan.

Are you ready to #LiveTheGame in #INDvPAK?

The ad has been conceptualized by Star Sports in-house team. And Sanjog Gupta, Head, Sports, Star and Disney India, said “The India-Pakistan clash is one of the biggest matchups in the world of sports. The clash at an ICC event attracts core and casual Cricket fans as well as viewers who don’t watch any other Cricket. The historic on-field rivalry between both teams is unparalleled and we believe that the iconic ‘Mauka Mauka’ campaign captures the spirit of this rivalry, blending competitiveness, banter and sportsmanship”,

Look who is back. 😂❤️
That vibe of WC was missing,this ad hits the right chords in every way.❤️#maukamauka

Mauka mauka ad is back!!Rolling on the floor laughing I love these so much. 🤣Can't wait for the ultimate match. Blue heart 😂

For the uninitiated, India and Pakistan have played 12 World Cup matches, and India has always won.