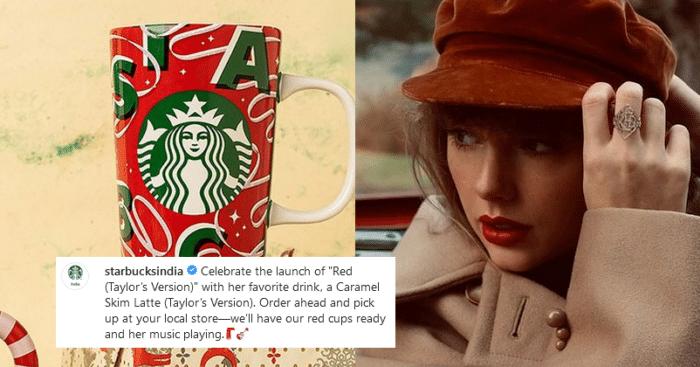 Starbucks has always been one brand to look forward to, especially during festive season. And this year, the brand has taken efforts to keep up and create buzz around its menu and other festive merchandise like its famed holiday cups and also leverage on Taylor Swift’s re-release of one of her iconic songs- Red during Christmas.

This year, keeping up with tradition, Starbucks has launched new holiday cup designs and drinks to celebrate the festive season. Holiday Cup designs named Wrapping Paper, Ribbon, Holiday Light, and Candy Cane have been created incorporating colours of red, green and white and touches of lilac’.

Since the launch of the first holiday cups in 1997, which received immense appreciation and acceptance, Starbucks makes most of the holiday season, by leveraging on them. And though they emphasize on other seasons too, the Christmas holidays are an exceptional case in the year. With the cold weather and hot beverage making an ideal combination during holiday season, Starbucks capitalizes on them making it the go-to drink during festive season. They keep their offerings as limited editions to justify special pricing.

However, this year is different. Due to decrease in footfalls at stores, the brands have partnered with food delivery platforms, Swiggy and Zomato, offering their beverages from select eateries at reduced prices.

The Starbucks India holiday collection is being promoted via online posts on social media platforms. Under #SparkMerry, one can buy this merchandise from online shopping platforms like Tata Cliq and Flipkart, which Starbucks has partnered with this festive season. One can also avail of the said merchandise at their stores too.

Starbucks has leveraged on Taylor Swift re-releasing her version of the song Red, from the album, All Too Well. By making available the singer’s favourite drink Caramel Skim latte at their local stores. Starbucks will play more of her songs at their stores and this partnership of theirs was reinforced by a short video on twitter.

That warm feeling of having a hot beverage on a cold and chilly evening is what Starbucks has been trying to sell. And to re-inforce this feeling, Starbucks launched new flavours and re-introduced old favourites as Season’s specials, through packaged blends, as limited editions. They have been promoted using various social media handles.

With so much happening, one just cannot miss all the fun and festivity at Starbucks this year!