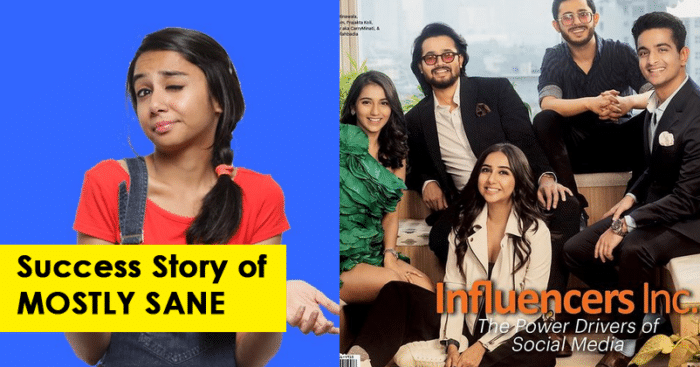 MostlySane aka Prajakta Koli- there will be very few people or hardly any, who have not heard or come across this name in the recent times. One of the biggest influencers and Youtubers in the current times, Prajakta Koli has given us a new outlook and space altogether via YouTube.

A middle-class Mumbaikar having born and brought up in Thane, Prajakta Koli completed her degree in Mass media from Mumbai University. Growing up she always had a knack and aimed at being a radio jockey and she managed to do exactly the same when she bagged an internship in one of the radio stations. While doing so she also kept herself posted making Instagram videos when she got noticed by Sudeep Lahiri from One Digital Entertainment who saw potential and talent in her and led her to explore the same by starting her own YouTube channel. But initially Prajakta was not convinced with this idea since YouTube back then was not considered a very reliable career option especially in a country like India. After contemplating a while on it and noticing that she was not doing very well in her radio career, she finally decided to take up YouTube content creation sidewise and started her own YouTube channel that we all know today as ‘MostlySane’ in the year 2015.

She uploaded a video of hers as a monologue titled as ‘types of singles on Valentine’s Day’ as her debut, wherein she created a lot of buzz among the audience that gained over 1000 views in just a few minutes of its upload. That was the turning point for her when she took a firm decision and quit her job as RJ and took up YouTube as a full-time thing. She gave her audience/viewers some of the most interesting and relatable content back to back which boosted her fan base like never before. Her video on ’10 Hilarious words Delhites use’ gained her even more recognition and increased her subscriber count from 3K to almost 30K within a time span of two months only. But her real success came in when one of her videos titles ‘Types of people on WhatsApp groups’ went viral all over social media that gained her a bang on subscriber count of 3 million.
Her relatability factor is one of the main causes behind people liking and looking forward to her content. The way she instantly connect to the common man is something that sets her apart from the crowd. In fact if you follow her on Instagram you will come across her posts and stories that are nothing but a very natural and candid portrayal of her daily lifestyle like working out, reading a book, family time and so on. She looks on the other side and finds a way to portray the everyday mundane lifestyle and instances in an interesting and humorous way via her videos.
Success comes with a lot of responsibility and Prajakta Koli has been an inspiration when it comes to this. With the kind of platform she is in i.e. YouTube, Prajakta Koli has taken up many steps and initiatives for the good cause. She raised awareness for several social causes and spreading positivity when she was invited by the Obama Foundation to attend the town hall meeting in 2017. She was also a part of #GirlsCount Campaign and YouTube and Instagram’s Safer Internet Day Program. She was applauded for championing  an initiative on Body Shaming called #iPledgeToBeMe. Prajakta Koli along with other youtubers from all over the world were chosen to create videos promoting tolerance. The video was then chosen by United Nations to be screened in New York. This indeed was a proud moment for the entire nation!

Prajakta Koli is definitely our girl-next-door. She has different kind of vibe and enthusiasm to work and the will to bring about a change for the good. She has gained a lot of popularity and love of her fans from allover the world with her sheer hard work and dedication that is highly commendable. Despite of being at the epitome of success there has been times in her life when she had slumps and blocks during her journey but that didn’t stop or distract her from her goal rather she tried even harder and made it to what she is today. She is indeed the pride of the entire nation and an inspiration for the youth of today. We hope to see more of her videos and keep relating!