Tata Sky has launched a new entertainment package into market named, ‘Tata Sky Classics’. The new campaign is launched which consists of an array of old films. Thus they chose Sharmila Tagore to be the face of this new ad.

For this campaign they have joined hands with Shemaroo Entertainment. The campaign consists of three videos in total.

The campaign is known as #KyaDinThe 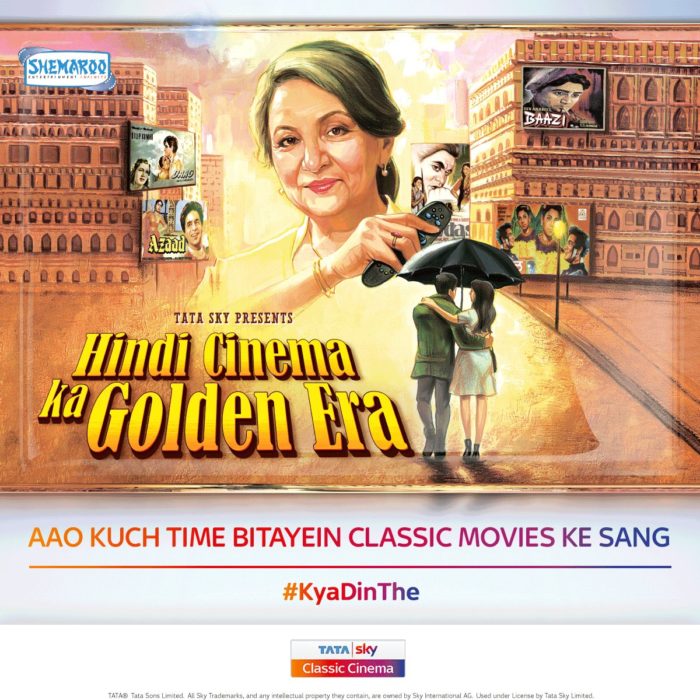 The Video opens with a grandmother who is noticed to share some moments with his grandson. The grandson is seen to be in a woe in confessing his love. That’s when the grandmother shares her thoughts and an old song flashes on TV screen. That gave him the courage to confess his love and he succeeded.

The second video opens up showing the woes of the grandson on the day of his first date. It’s raining heavily outside and the grandson complains about the weather stating that the rain will ruin his first day out with his love. That’s when an old song ‘pyaar hua ikraar hua’ starts getting played on TV and the grandmother explains that rain makes things special. The video ends on the keynote of bringing love and friendship ideas from past days!

The third one is the best. It opens with the grandson sad about his fight. The grandmother again comes to rescue. She says sometimes making someone laugh gives more impact than a sorry. Then she captures a video of him saying sorry to his lady love in a funny filmy way. The grandson says, ‘I am awesome.’. In reply the grandmother says,’No the films are!’

The basic idea behind these by Tata Sky is to bring back the love for the evergreen movies of that era and showcasing how still they have a significance in our life!