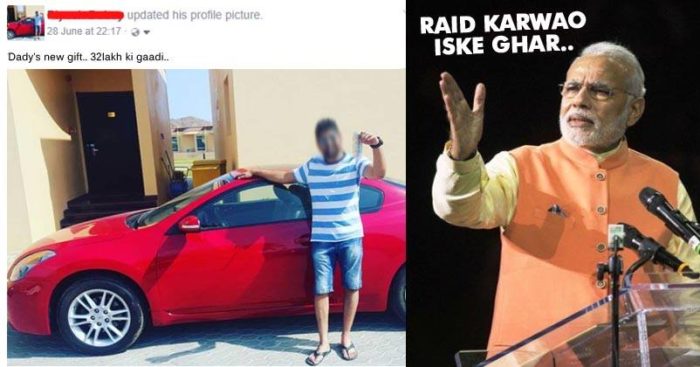 Do you have a habit of giving check-ins or posting pictures of your lavish lifestyle on your social media platforms? Besides your thousands of followers and friends admiring those pictures and posts, there will also be the Income Tax Department now going through them. Do you now think technology is a boon or a bane?

Tax dodging is one of the current problems in the society. Government earlier has taken serious steps to curb this but might have failed on certain grounds. India has millions of users in social media platforms. So the government took a new step to scrutinize the profile of users of Facebook, Instagram, and Twitter to keep a track on the properties and objects they are buying.

Your friends Anita, Roopa, Kunal and the Indian Government are all watching what you post!!! Beware of #ProjectInsight! #Tax #TaxEvaders pic.twitter.com/d5qIUUO5O6

If one has already paid the tax or informed the department then its fine but if Tax Department finds out that one is not paying his tax on the object that one claims to have purchased then they are in serious problem. They might have to answer to the Income Tax Department or might see a Taxman knocking their doors.

According to reports, a business news website will carry on the venture on the orders of the government. Government named it as Project Insight and it says,

“Built over seven years at a cost of about Rs1,000 crore ($156 million), Project Insight will complement the world’s largest biometric identity database and India’s most ambitious tax overhaul as policy makers try to get more people to pay up”

This is not the first time government has taken such a step. Earlier too governments of other countries like USA or UK have used big data and data analysis to remove tax evaders. Arun Jaitley, Indian Finance Minister during Union Budget declaration made an announcement that government would be using big data technology to catch tax dodgers.

He said back in February,

“Technology is a boon for mankind. We plan to use technology in taxation department in a big way to make life simpler for a law abiding citizen, and also for data mining to track tax evaders. After demonetisation, the preliminary analysis of the data received related to deposits made in old currency presents a revealing picture. This data mining will help us expand the tax net.”

So before you go for social media show-offs think again!