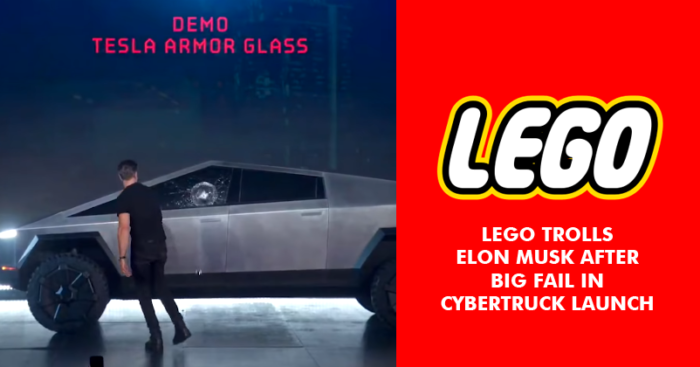 The company’s design chief then attempted to figuratively demonstrate this by throwing a ball at the car’s “shatterproof” windows. The windows literally shattered and Tesla stock dropped more than 6%.

Elon Musk had emphasized the design, power, and durability of mainstream trucks, only to be shaken when he boasts about his new vehicle’s windows backfired. But after his head of design, Franz von Holzhausen cracked the driver’s side window with a metal ball in a series of tests for the crowd at the event in Los Angeles.

Musk was left shocked too and he said,’Oh my God, well, maybe that was a little too hard”.

The incident became a point of discussion on the social media & people trolled Tesla mercilessly.

The toy company Lego couldn’t stop themselves from taking a dig at Tesla & their new launch event. The brand tweeted a picture on their Twitter handle with the caption,” The evolution of the truck is here. Guaranteed shatterproof”.

The evolution of the truck is here. Guaranteed shatterproof 😬 pic.twitter.com/RocTEkzzwI

However, the Cybertruck launch debacle doesn’t appear to have done lasting damage as by Sunday the company sold 200k Cybertrucks & Tesla stock rose 4% and Musk’s net worth significantly recovered.

The Cybertrucks retail at between $39,000 and $76,900 but Tesla won’t start manufacturing the apocalypse-chic vehicle until late 2021.