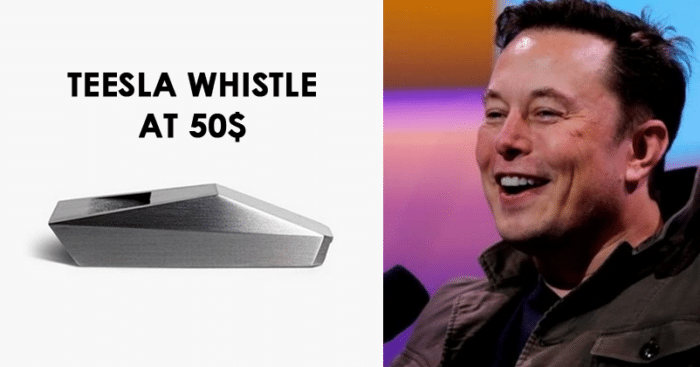 In October, Apple Inc launched a premium polishing cloth alongside its new MacBook Pro laptops. The cloth has been in news since then, given its high price, and has been trolled enough on social media.

However, Elon Musk who is known for staying in news, has also introduced an overpriced accessory, just like the Apple cloth. Elon announced the launch of the product on Twitter, inviting users to blow the whistle.

Blow the whistle on Tesla!https://t.co/c86hLA0iQK

After uploading news about the new Cyberwhistle on Twitter, he immediately tweeted about the polishing cloth by the electronic giant Apple at an astonishing INR 1900/-.

Don’t waste your money on that silly Apple Cloth, buy our whistle instead!

The Cyberwhistle has already sold out, as soon as it was announced on the Tesla website, just like the Apple polishing cloth that was sold on Apple’s online store. The cloth was made of non-abrasive material and had an Apple stamp on it.

The Cyberwhistle made from medical grade stainless steel, was limited edition and was inspired by Tesla Cybertruck. The Tesla honcho also mocked the Apple polishing cloth in a tweet stating- Don’t waste your money on that silly Apple cloth, buy our whistle instead.

The whistle is priced at INR3700, and is touted to arrive in the market before the Tesla Cybertruck.

The tweet and the product have attracted a lot of interesting comments.

Now that I've spent an eye-watering $3840 on my first ever Mac, I might as well buy the Apple Polishing Cloth for an additional $25 to wipe away these fking tears. pic.twitter.com/XlVYShxyyN

got my first tesla pic.twitter.com/uf9jTvUJJo